NSFW (not safe for work) photographic projects, aka those that would be better to look away from prying eyes, have always been a highlight of our selection.
They are the ones that become part of the most read as soon as they are published and then remain there, on the highest steps of our faithful analysis tools.
These articles, however, despite the acronym we use to define them, do not only tell stories of nudity but rather tell delicate, extremely sincere and vulnerable relationships, ethereal and sensual projects.

Here you will find the 10 most read during the last year, but if you do not have any enough, we have a whole archive made especially for you.
Good reading!

Femininity, intimacy and delicacy are all elements that make up the NSFW shots of the Italian photographer Alessandro Casagrande, an artist whose shots are surrounded by a nostalgic atmosphere.
The woman’s body is the protagonist of a photographic series that seems to be the result of an album of memories, the story of a love that is in tune with the emotions of the viewer, of those who know nothing but can still feel a lot. 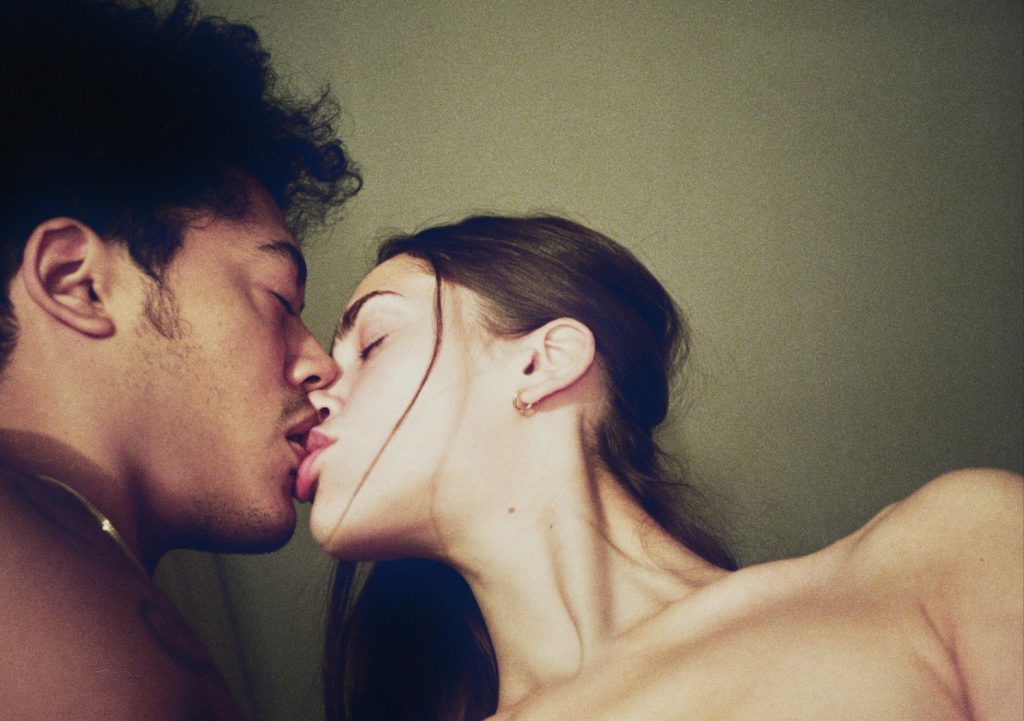 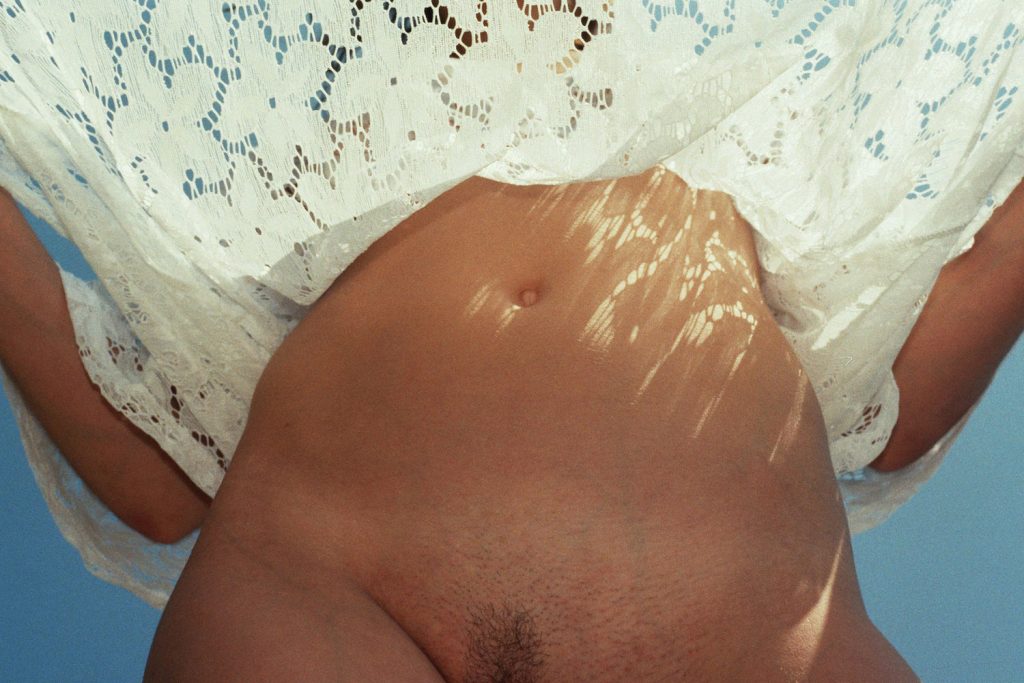 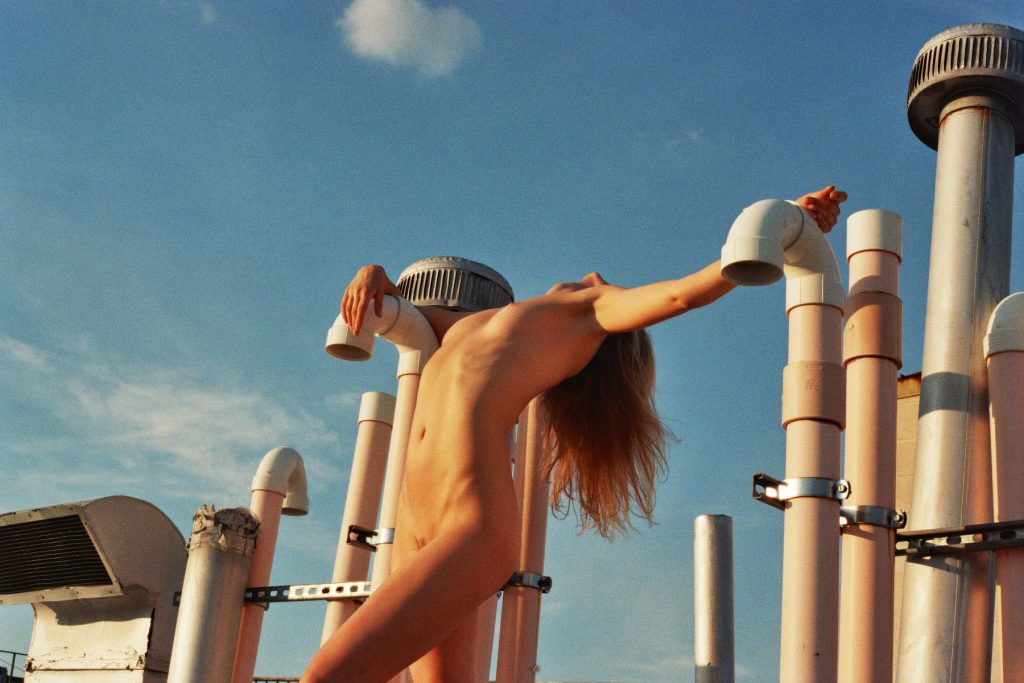 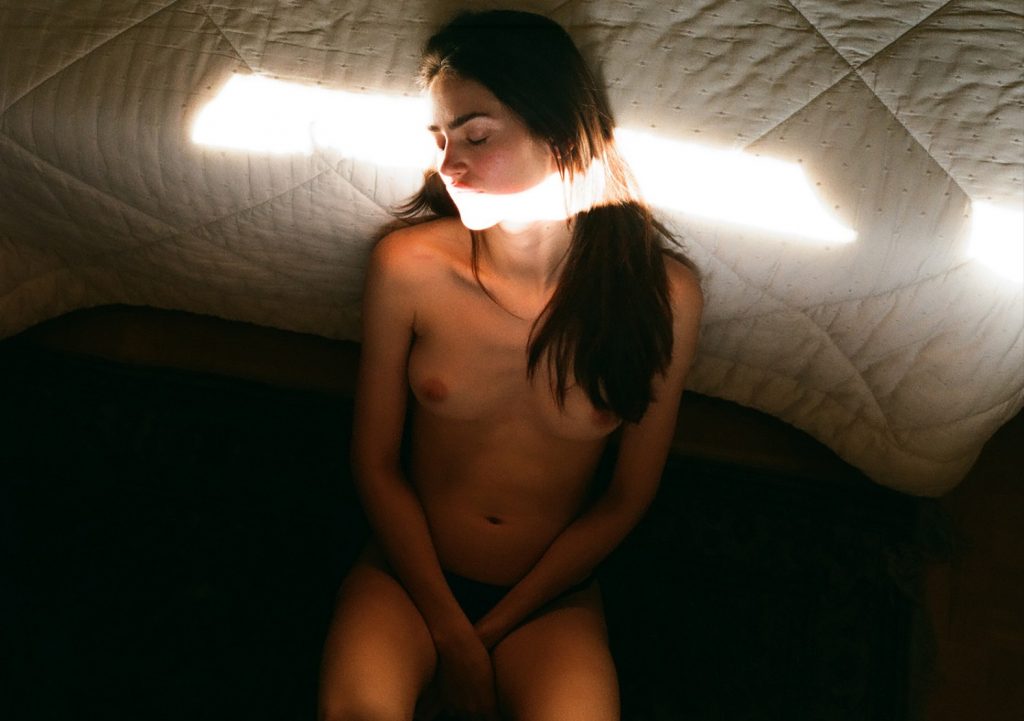 Female bodies and nature in the shots by Anne Barlinckhoff

Truthness, the photographic project of the Slovak artist Evelyn Bencicova, explores the portrait as a form of dialogue or monologue, as a means of direct and frank communication, but at the same time fragile and vulnerable.
This photographic series captures the complexity of our inner worlds by laying bare the emotions and the essence of its protagonists, women get rid of all that is superfluous, revealing themselves in all their splendid fragility.

Lou Escobar is a French photographer and film-maker who creates beautiful images characterized by a strongly cinematographic style, almost all her shots seem to be taken from scenes of a Hollywood movie.
The women immortalized by Lou Escobar are at ease with their bodies and become icons of a kind of daring sexuality that conveys freedom and sensuality, if only through the gaze.

Søster Studio, the authentic beauty of the female body

The Søster Studio’s photographic project is all about the authenticity and empowerment of women.
All the images, taken by an exceptional team of stylist Kama Krystel, photographer Anne-Line Nygaard and brand founder Pernille Nadine, were taken on film and not retouched, to accentuate the models’ identity and allow them to explore their sensuality and diversity without fiction.

Carlota Guerrero is a self-taught photographer whose photographs explore the concept of beauty without censorship.
Over the years, the style of her shots has proved to be perfect for high fashion editorials but for the realization of artistic performances that revolve around the woman’s body.
What has made her works recognizable and much loved is the way she portrays the body, there are no limits and barriers but only the delicate sensuality with which she describes them.
The women she portrays represent the freedom to show themselves and to show their bodies, not because they are forced to do so, but because they are free to do so. 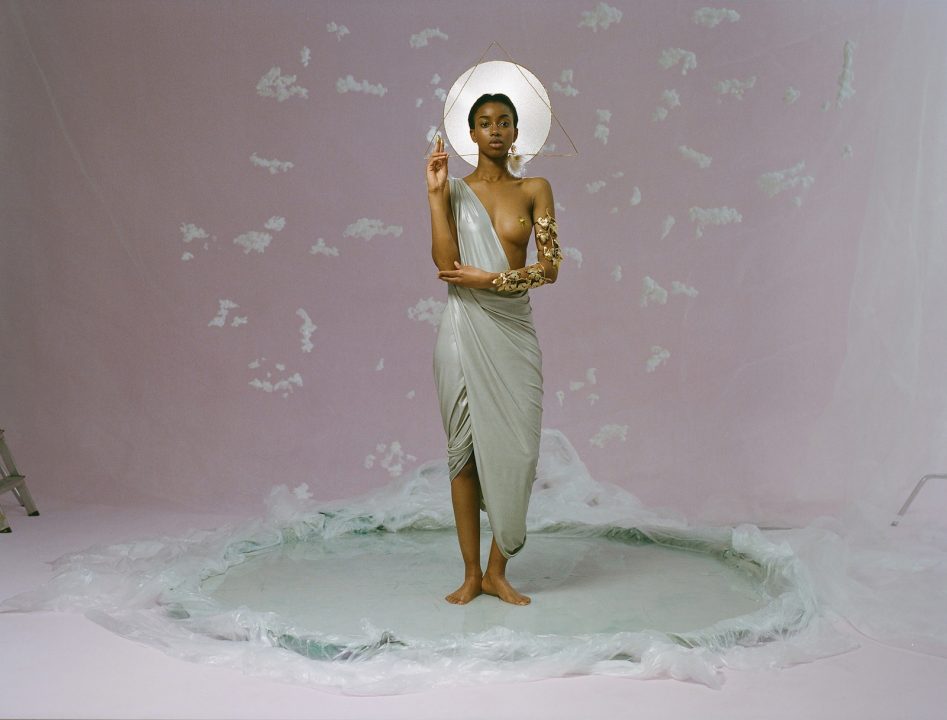 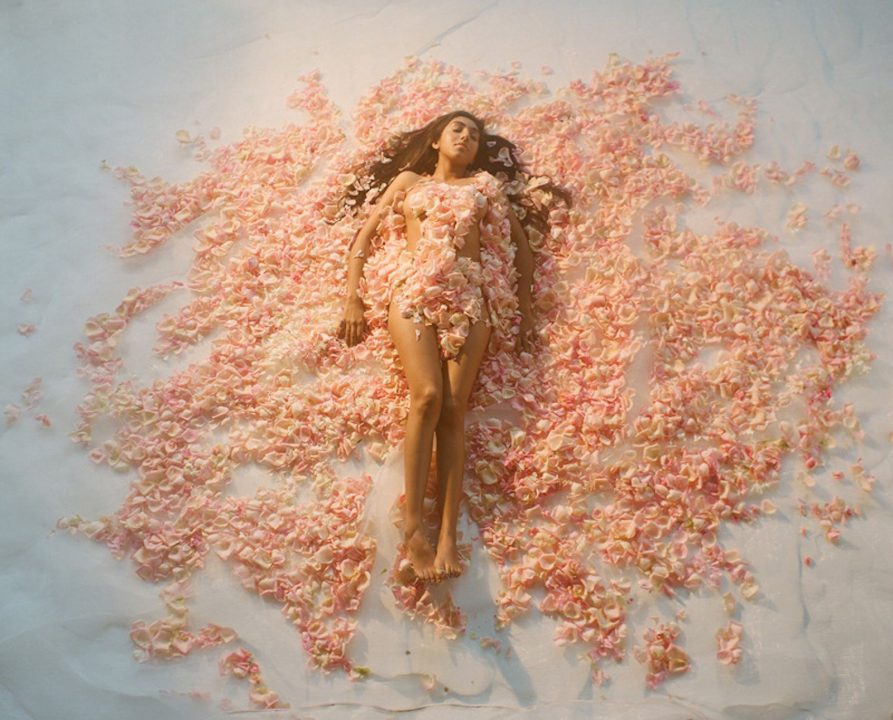 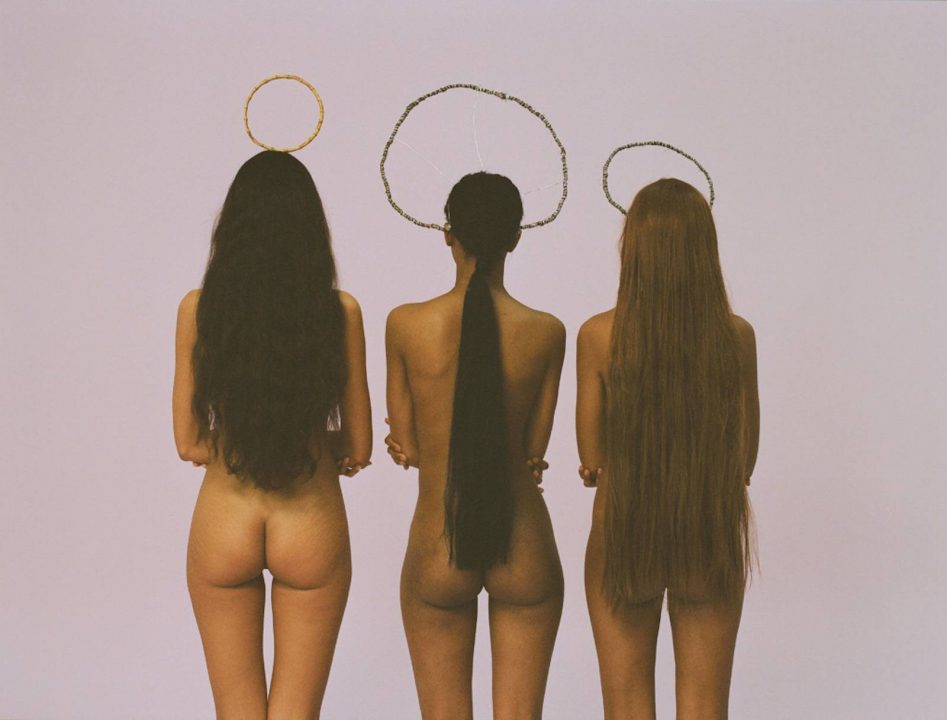 Shannon Tomasik is a photographer from Michigan who seems to take her photographs for a personal diary.
With her 35mm film camera she creates shots with a cinematic aesthetic, which she calls indie, with which she tells emotions, moments of life, the relationship with oneself, with others and with a space that is often empty and melancholy.
Her images do not hide the need to urgently communicate personal stories in which it is easy to feel a bit protagonist.

Francesca Jane Allen, is a London based photographer who despite her young age has already shot for many fashion magazines and brands.
Her style, which we also find in the Girls! Girls! Girls! project, is sensual, fresh and feminine.
Francesca Jane’s women are independent and free from all taboos, capable of transmitting strength and at the same time fragility. Her NSFW images exalt lean and slender, curvy and sinuous, androgynous or hyper-feminine bodies with the same importance, making all women feel part of an aesthetic language that excludes no one.

The world behind a mirror, romantic NSFW shots by František Konopa

František Konopa is a young self-taught photographer from the Czech Republic who uses art to communicate the most real beauty, that of faces, their smiles and eyes, when they are alone and when they love.
One of his latest projects is a collection of NSFW black and white shots that speak of love and intimacy with a delicate sensuality.

The female portraits of Marat Safin, a Russian photographer, convey a sense of calm and intimacy.
Her protagonists are women, in the house, in the kitchen, lying on the bed, surrounded by nature, free in the tall grass, women looking in the car or immortalized in spontaneous poses.
The warm light typical of his shots immediately makes the family atmosphere, giving us an air of home, of tranquility. 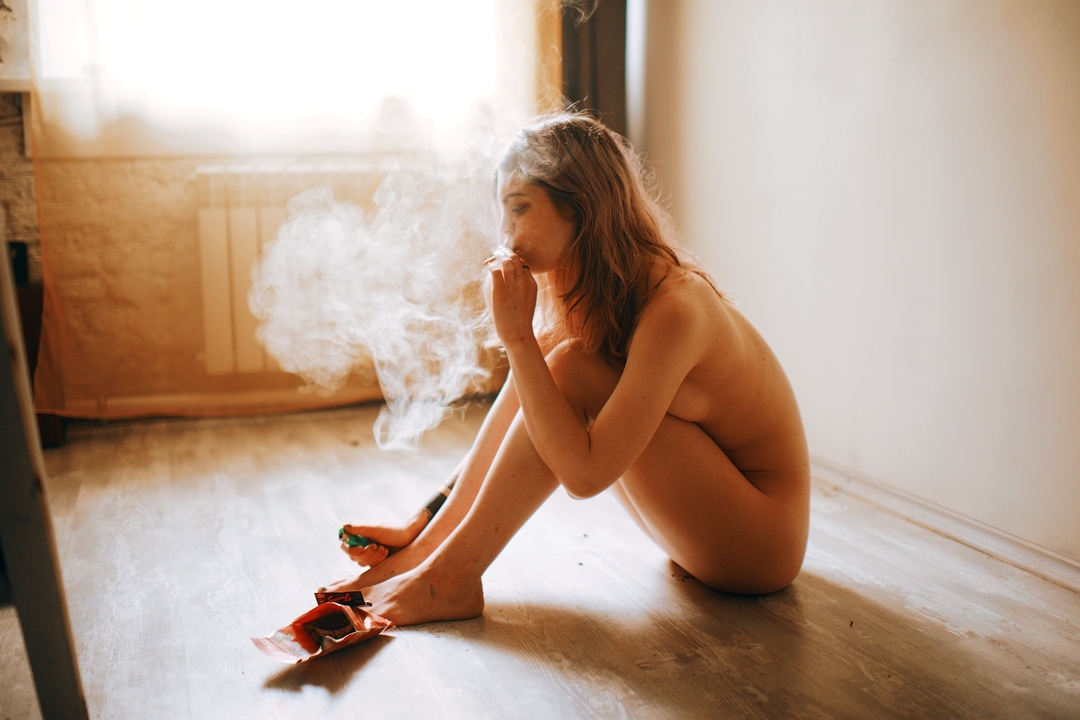 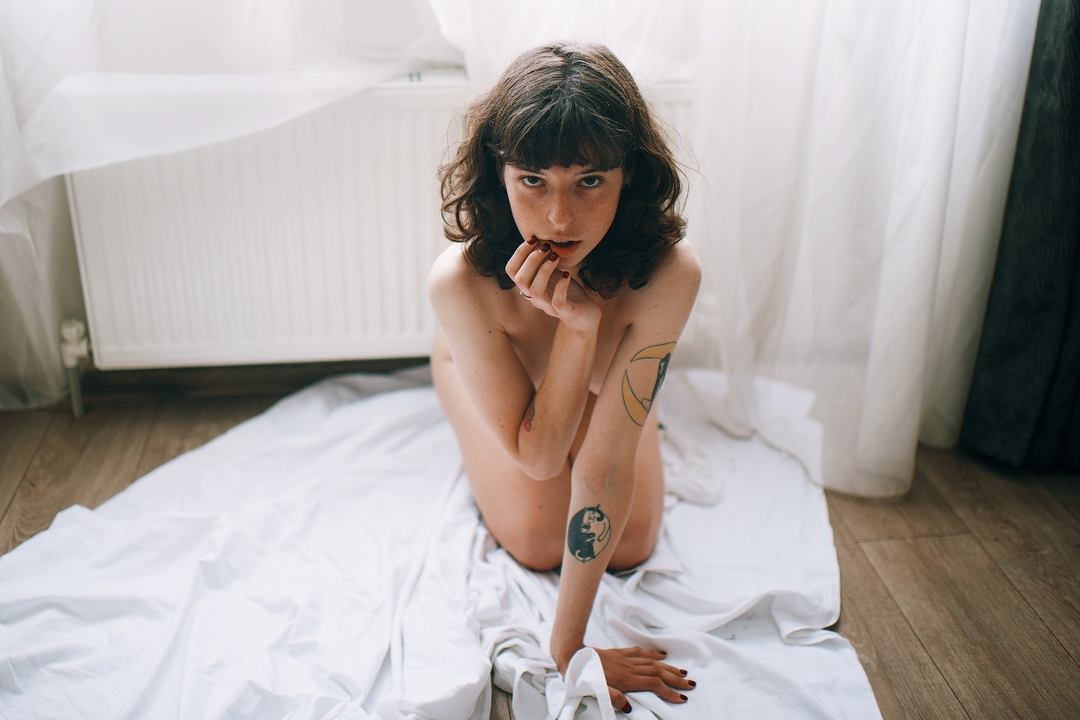 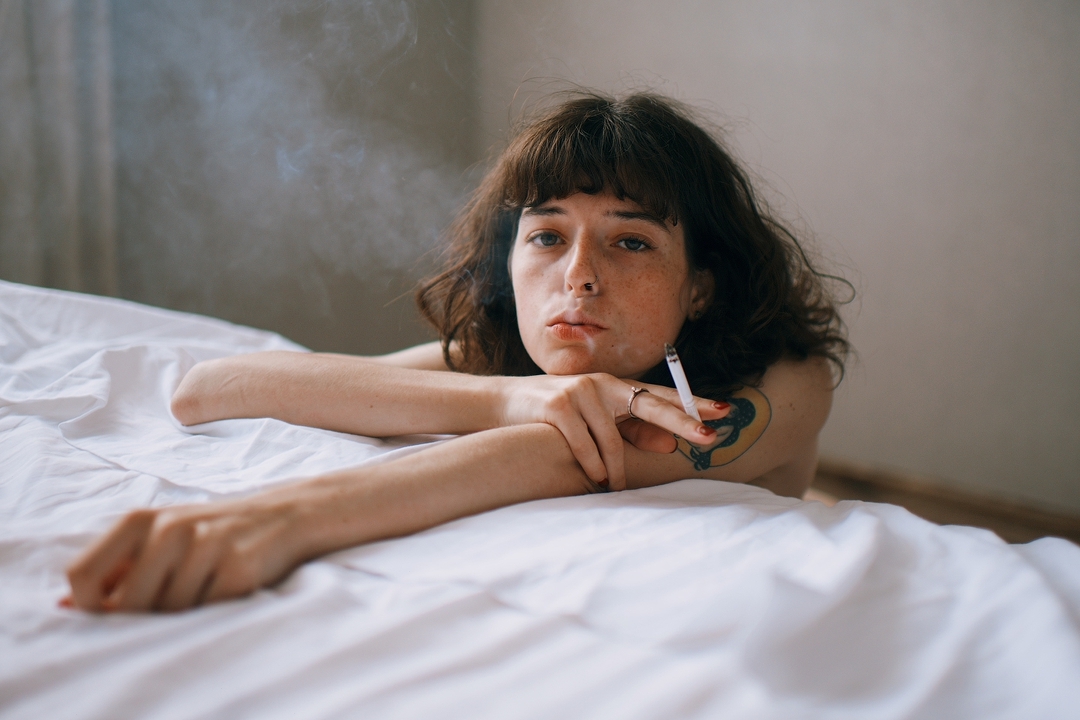 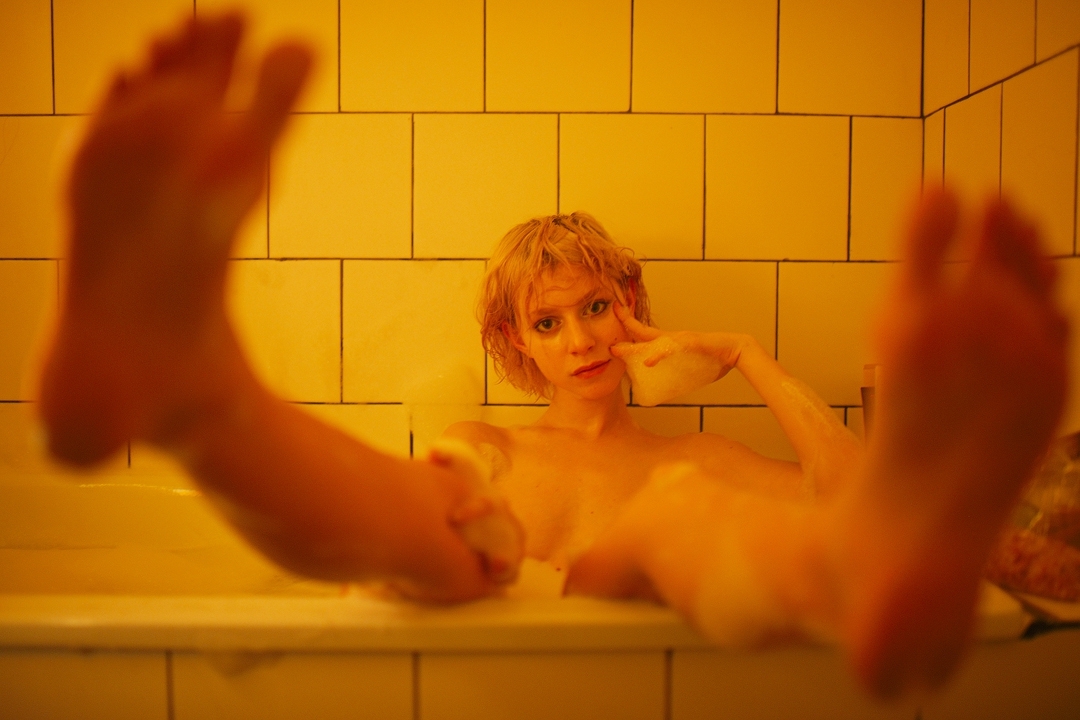 Era Mare is a recently published photo book that recounts the disaster caused by the high tide that hit the Venice lagoon last November.

It’s a book of about 24 pages with photographs and texts both in Italian and English. All the proceeds will go to the cultural association Do.Ve, formed by private individuals and commercial activities that for a couple of years have been involved in the protection and enhancement of part of the district of Dorsoduro. The association, in turn, has undertaken to use the money from the sale to help those who, after the high water, have not yet been able to start again.

The project was born thanks to the photographer Matteo de Mayda who was present in those days in the Venetian city. The artist documented what happened and from his very touching shots started Era Mare, a project formed with the support of the bruno studio (Andrea Codolo and Giacomo Covacich) and the texts of the curator Francesca Seravalle.
The particularity of the publication is that it is divided into two halves: one emerged and one submerged, with the apparently normal upper part acquiring a completely different meaning and impact when completed by the lower one.

A silent silence persisted and erased the defined contours between the foundations and the rii, between the canals and the calli, swallowing the streets and isolating the bridges, elected as meeting places where the few remaining inhabitants could greet each other in the dry. Every now and then, for a few hours, it happened that the underwater world would emerge, showing magnificent Byzantine mosaics, Palladian and Venetian style terraces – cit. Francesca Seravalle.

Matteo, in the days of the flood, was in Venice with the idea of taking a few shots for the city where high water was the norm without expecting extraordinary events. What you can perceive from his shots is surely the irony with which this event was faced and the strength of the Venetian people who reacted in the best way.

Every shot of Era Mare is delicate, conveying strong and contrasting sensations, telling a story and avoiding the storyline of the damage out of respect for the people affected. The reportage tells the suspended and fragile atmosphere of Venice, its lagoon and the Venetians.

If you also want to help small traders who have suffered big damages, you can go to the site and make a donation of your choice! For each donation, the book is given as a gift and sent home.

Every day, on our Instagram profile, we ask you to share with us your most beautiful pictures and photographs.

The fogged glass becomes a canvas on which to paint in the photographic series Glass Corner, created by Peter Hoffman. A photographer, artist and educator from Durham, North Carolina, Peter has an eclectic and highly experimental attitude, which he seeks to develop through the original representation of places, situations and contexts.

Glass Corner is the name of the eponymous book of images that were taken through a window during the winter, which the artist spent in Chicago.

The work is a meditation on surface, environment, gesture and color, with consideration to how the window paradoxically connects and separates people in the public space.

American photographer, writer, and curator Aaron Schuman was born in Amherst, a small town in Massachusetts, the same small town that gave birth to Emily Dickinson on December 10, 1830.

It is to her, but also to Amherst itself, that Aaron pays homage in his latest photographic series SLANT. The whole project was born from the “Police Reports” section of a local newspaper, a weekly collection of crimes or even just suspicious events that occurred in the city. In 2014, the photographer started to cut out these blanks and store them, without yet having an idea on how to use them.

It wasn’t until later, after taking a series of photographs taken in the streets around Amherst, that he came up with the idea of accompanying the images with police reports, creating an association of elements with something in common, but not perfectly matching, just like Emily Dickinson’s famous slant rhyme.

Imperfect rhymes, or slant rhymes, are made up of words that sound the same. These assonances, then, can link two words, but also word and image; it is Dickinson herself who says this in the poem Tell all the truth but tell it slant.

In the same way as Dickinson, Aaron Schuman has created such a profound link between image and text that he has created a whole story that is composed of Amherst facts and Amherst photographs, but far from the true story of Amherst.

The final result, published in the book SLANT, begins as a reportage of a small town like many others but ends up being a reflection on the thousands of false news stories we are surrounded every day. 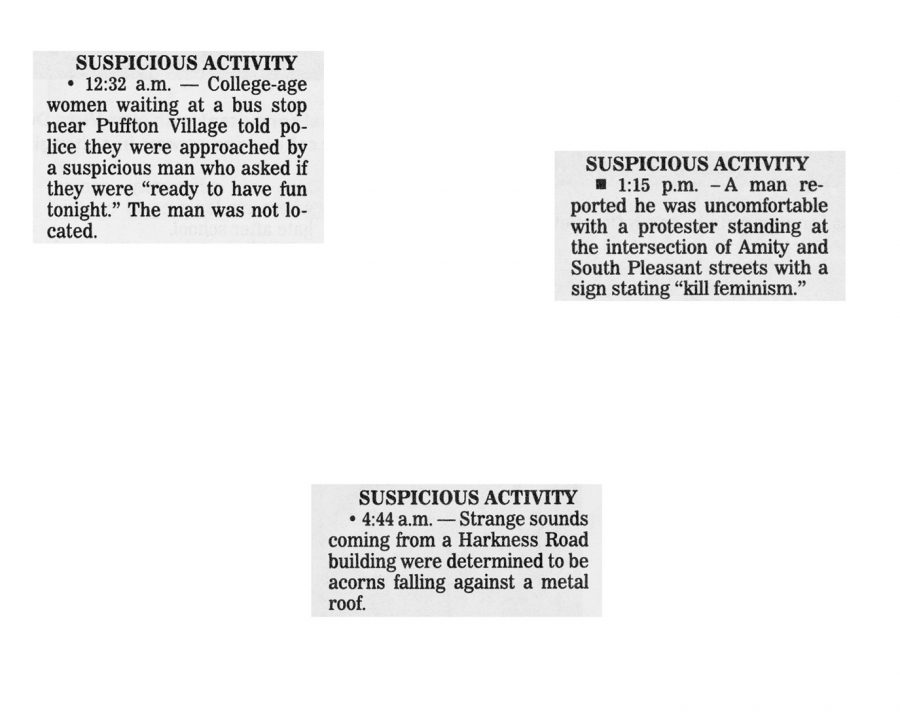 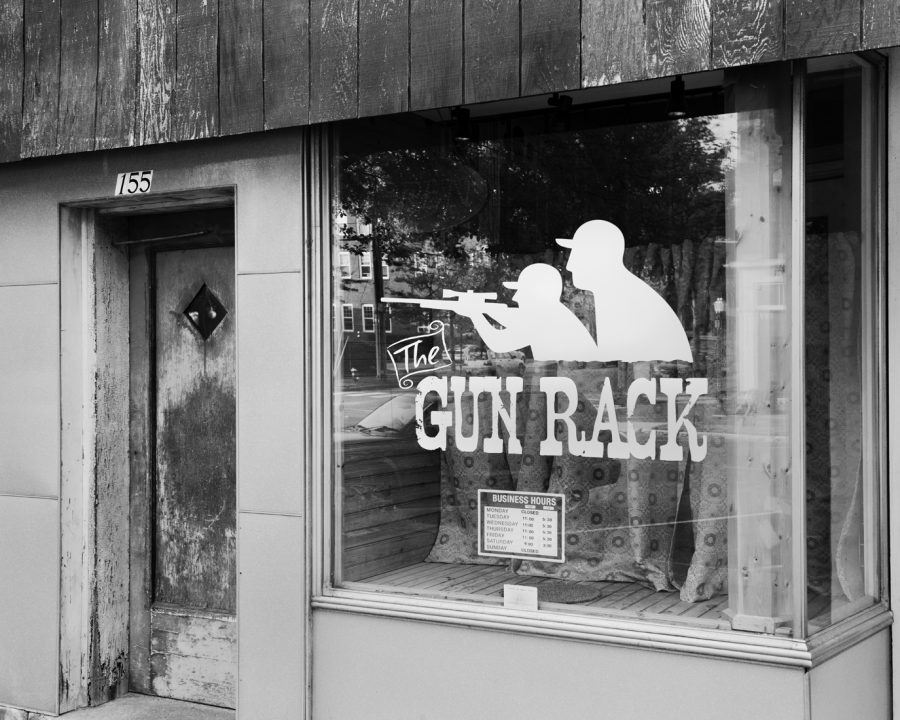 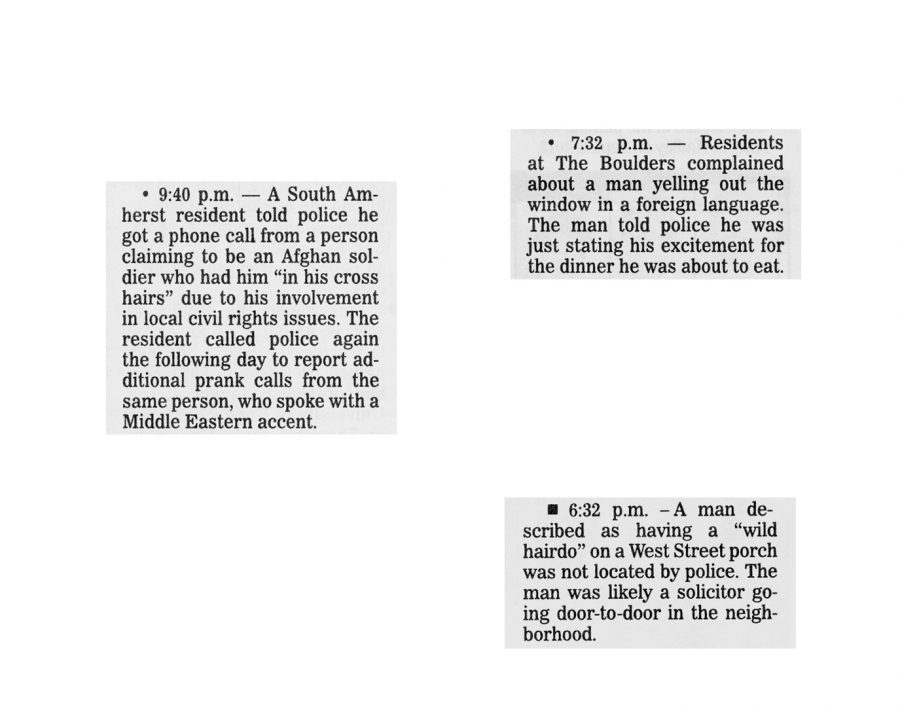 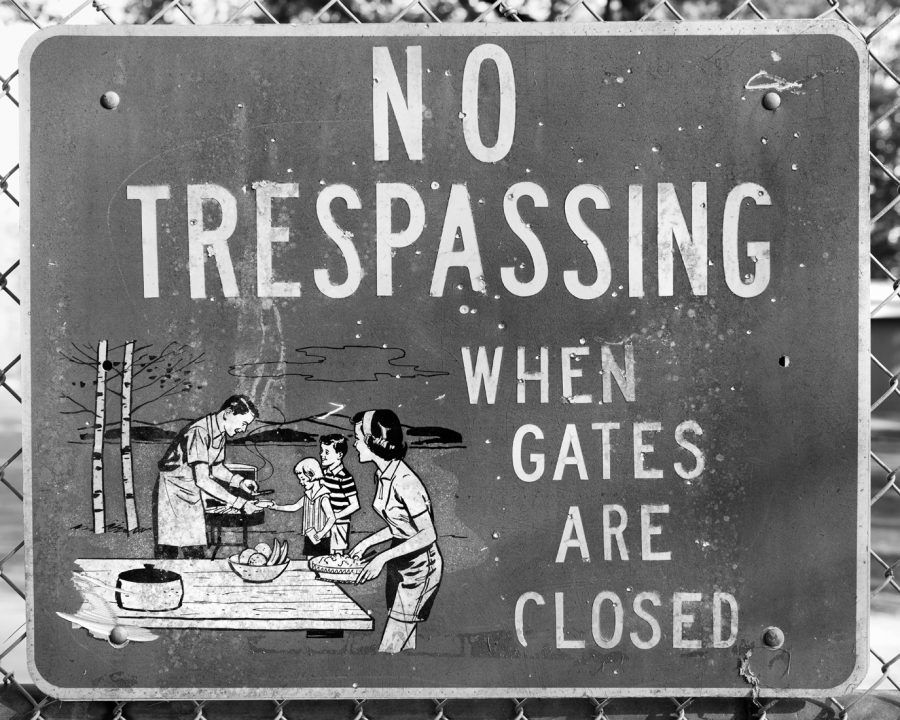 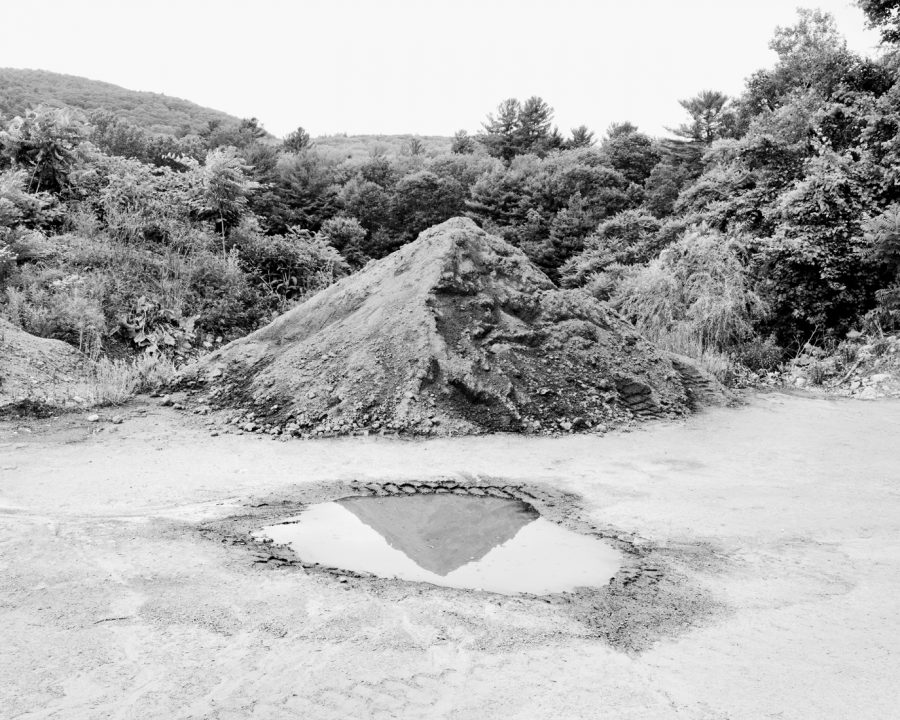 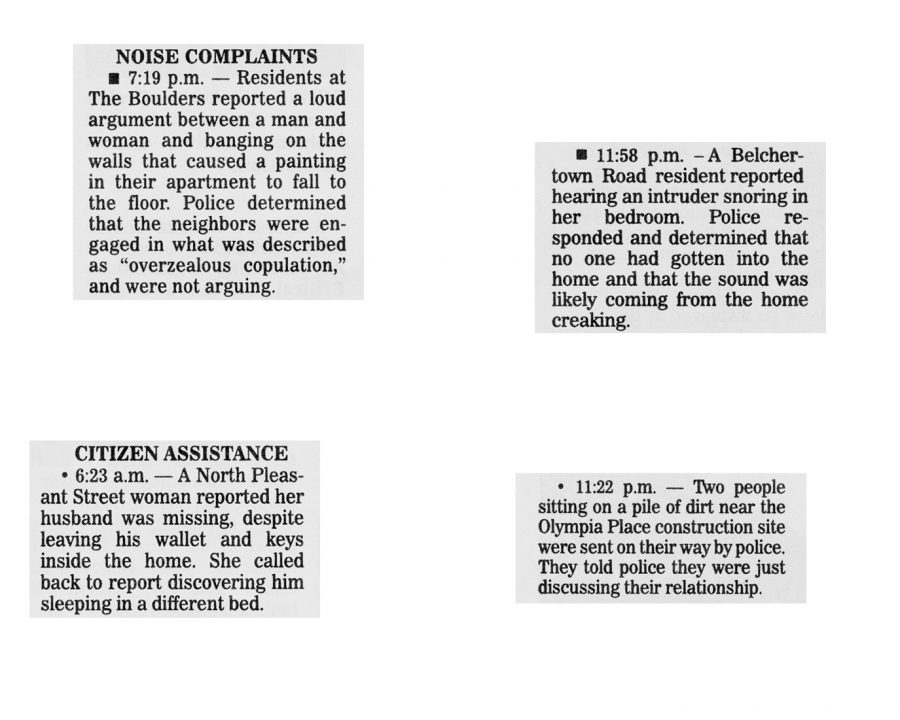 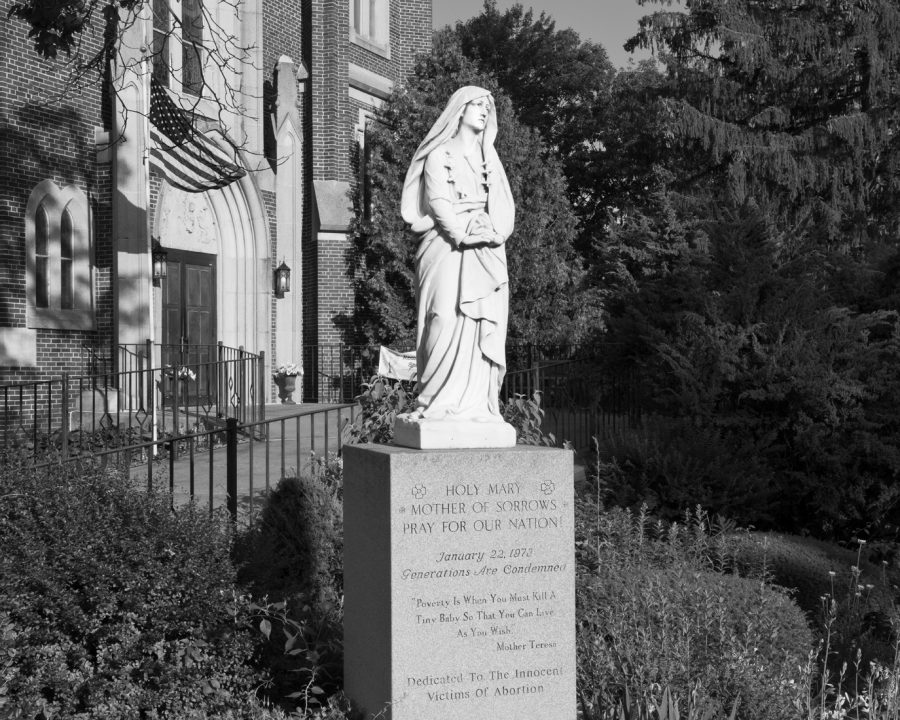 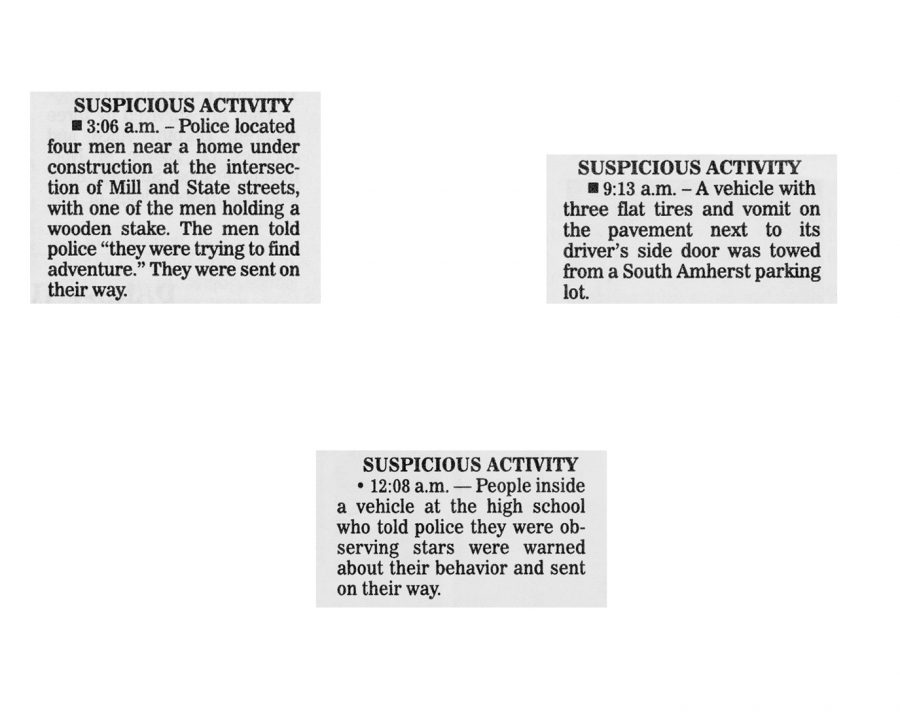 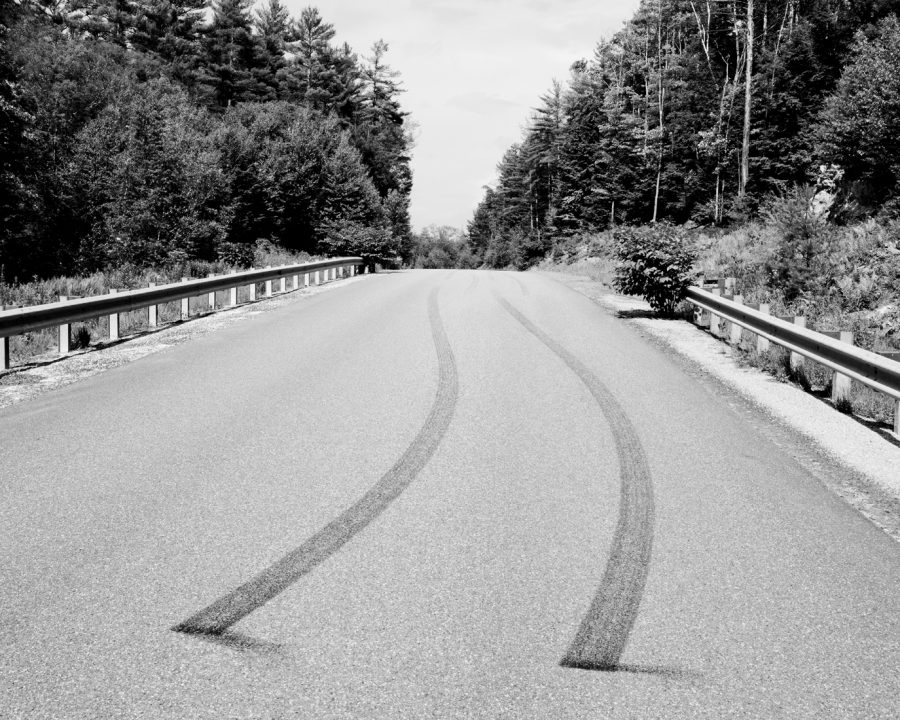 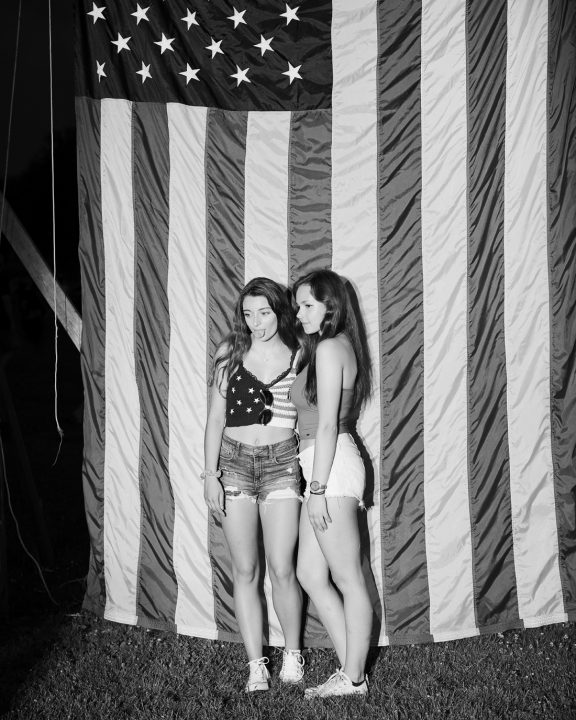 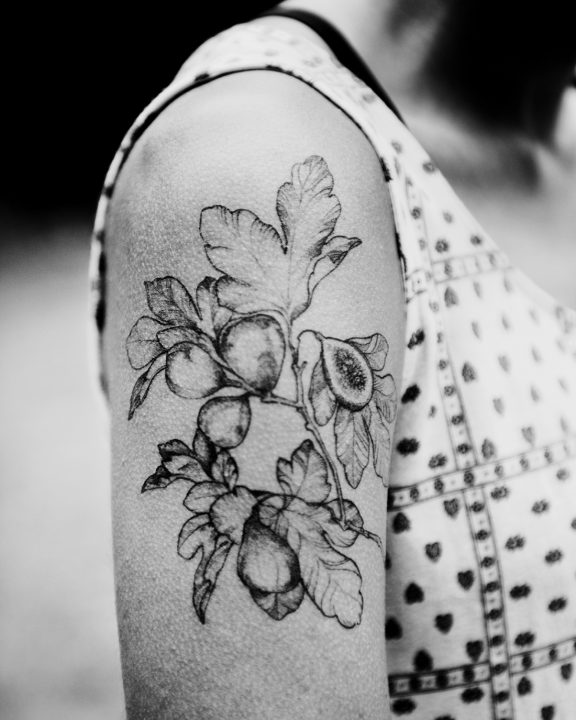 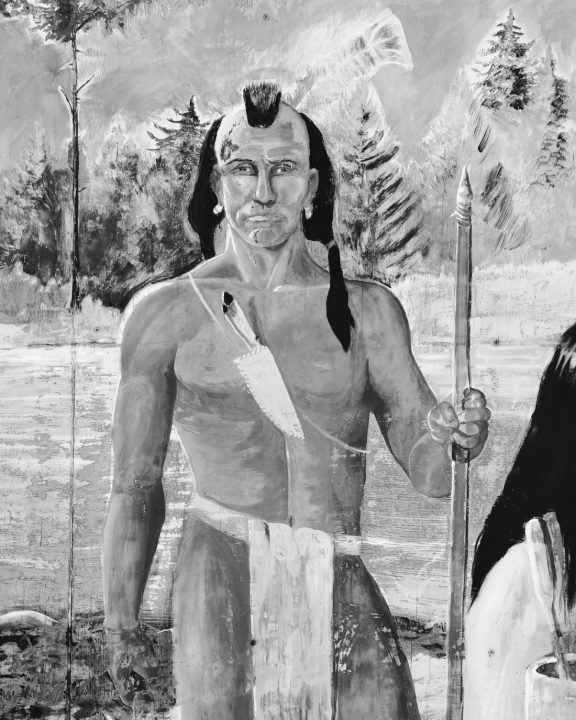 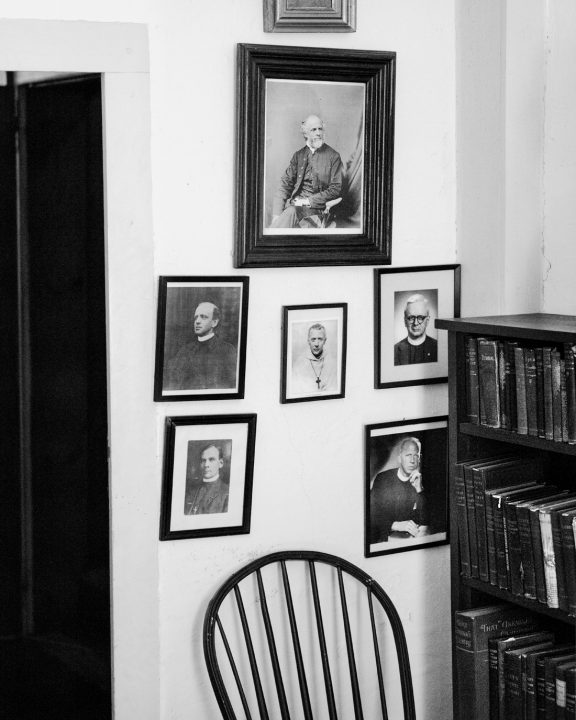 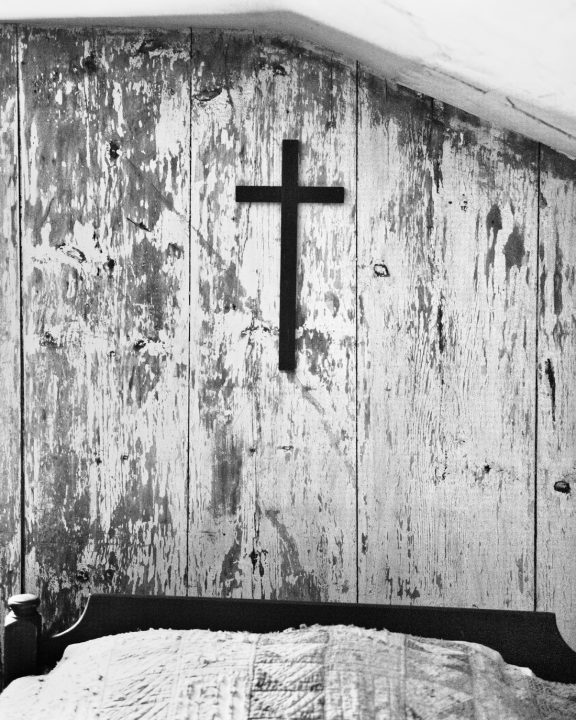 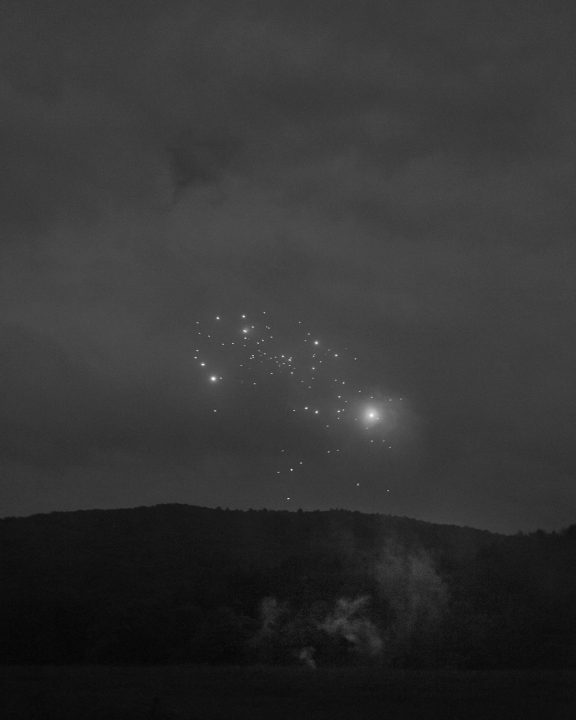