Our former Minister of the Interior is still at the center of the murals by street artist TVBOY. His last work appeared in Milan on one of the bridges of the Navigli and is, in addition to a clear stance against Salvini, a clear line-up by all the “sardine” of Italy and especially by Liliana Segre.

Yes, in just one small work TVBOY managed to condense all this, immediately becoming viral.

The mural, always made with a technique that involves the use of spray and acrylic on the wall, shows Liliana Segre holding a sign with the words “Stop Hate” and, next to her, Matteo Salvini, or rather Matteo Sardina showing another sign depicting a real sardine and the logo of Esselunga crippled in “Lasa lunga“.

This artwork is accompanied by another mural, on the other side of the bridge, with the same sign with the sardine, but this time the fish sold in all supermarkets has the face of Salvini.

Like all TVBOY’s works, probably also “Matteo e Liliana Manifestanti” doesn’t have a long life, but even if it won’t last forever, it certainly got the expected results.

We just have to say one thing, TVBOY continues like this!

The Prado Museum recently collaborated on a project with the World Wildlife Fund (WWF) in conjunction with the 2019 UN Climate Change Conference in Madrid. Awareness of this issue is also growing within the museum context, where the paintings in the institution’s collection have been digitally modified to reflect a world destroyed by inaction.

The project has been christened “+ 1.5ºC Lo Cambia Todo”, which in Spanish means “+ 1.5ºC changes everything”. The paintings of three Spanish artists (Francisco de Goya, Diego Velázquez and Joaquín Sorolla) and a Flemish Renaissance painter (Joachim Patinir) were considered the most relevant to the project by art experts. To effectively spread the message, the modified works were placed on billboards in Madrid and found shared online under the hashtag #LoCambiaTodo.

For the Museum, this project represents an opportunity to continue placing art and its values at the service of society. The symbolic value of the masterpieces and the impressive artistic recreation that we present with WWF is an excellent way to transmit to everyone and especially to the young generations what is really at stake in this fight against climate change.

Urgent problems such as rising sea levels, desertification and the issue of refugees turn the works of great European painters into an advertising campaign to save the environment.

In Budapest, at the l’Institution of the Hungarian Academy of Arts, it is possible to visit Light Architecture, an installation conceived and created by the Hungarian architects Bálint Botzheim and Sándor Böröcz, which is composed of a large number of abstract lights. The latter are placed inside a large black space that imitates the universe and illuminates it in a certain sequence. The work Light Architecture sets all the lights in motion and outlines abstract spaces. The spectators who visit the installation not only follow the beams but can also walk inside them, becoming themselves an integral and active part of the work. The artists have animated the light effect with the aim of creating architectural geometries that define the physical space in a realistic way.

To make the work even more complete, Péter Mátrai, who contributed to the realization of the sound part of the work, composed a piece of music for the installation that goes to the rhythm of the flashes. The flashes spread outwards, while a dark space is created in the center. Subsequently, the shape narrows, becoming a thin black line that then disappears.

The light installation consists of a 16x16x10 pixel RGB matrix, in the middle of which there is a five-high corridor of irregular shape and includes about 2,500 pixels divided over 16 artnet universes.

With this exhibition, the architecture exhibition commemorates artists born in Hungary, in particular, László Moholy-Nagy, István Sebők and Andor Weininger on the centenary of the founding of Bauhaus, a school of architecture, art and design that worked in Germany from 1919 to 1933. 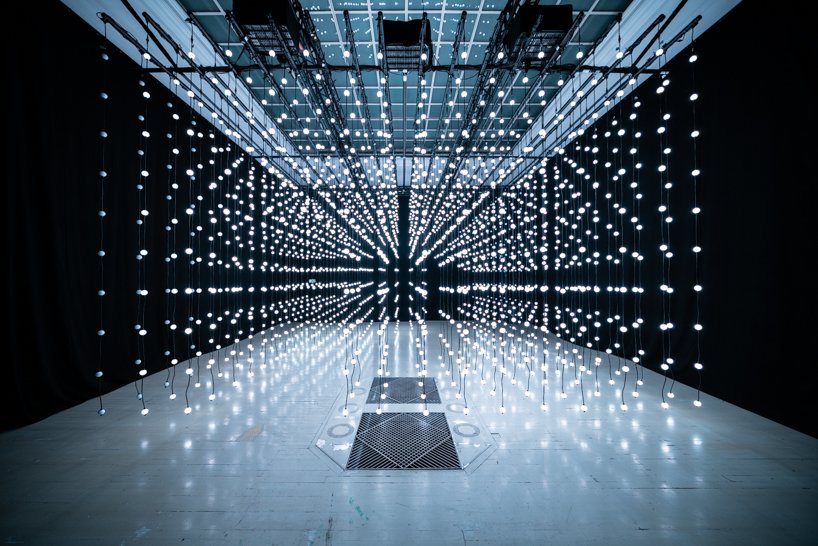 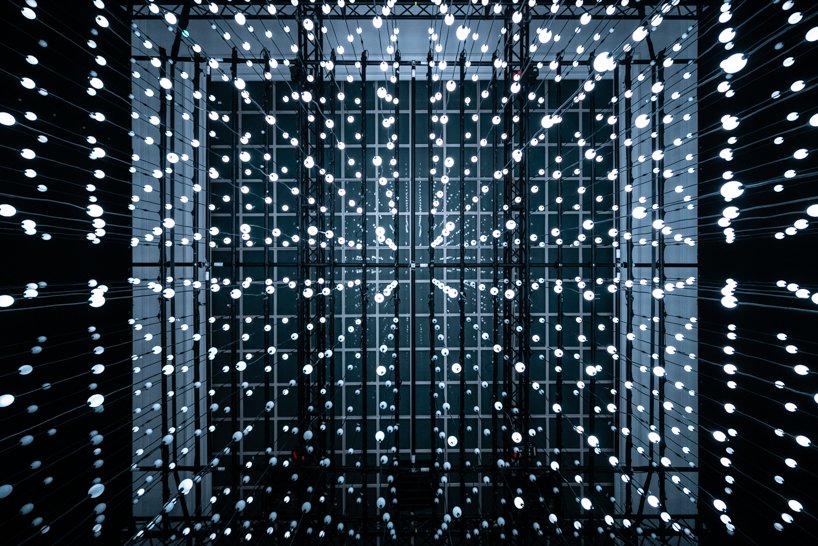 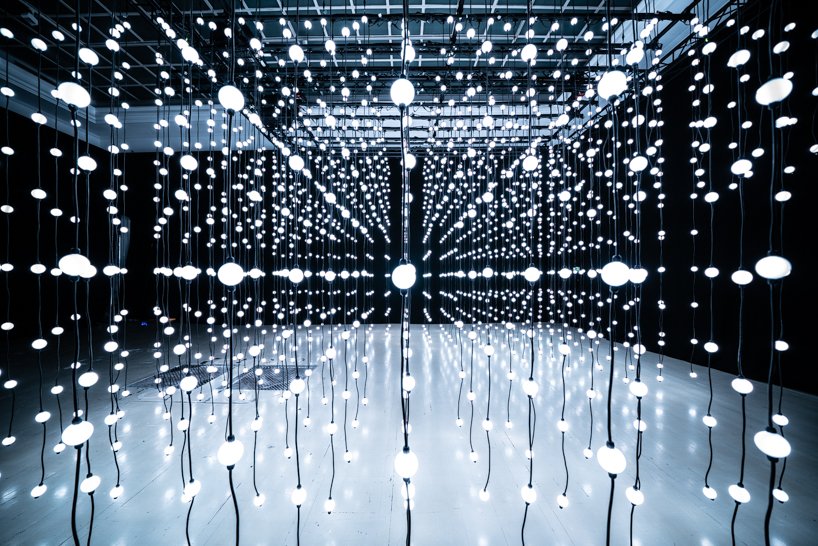 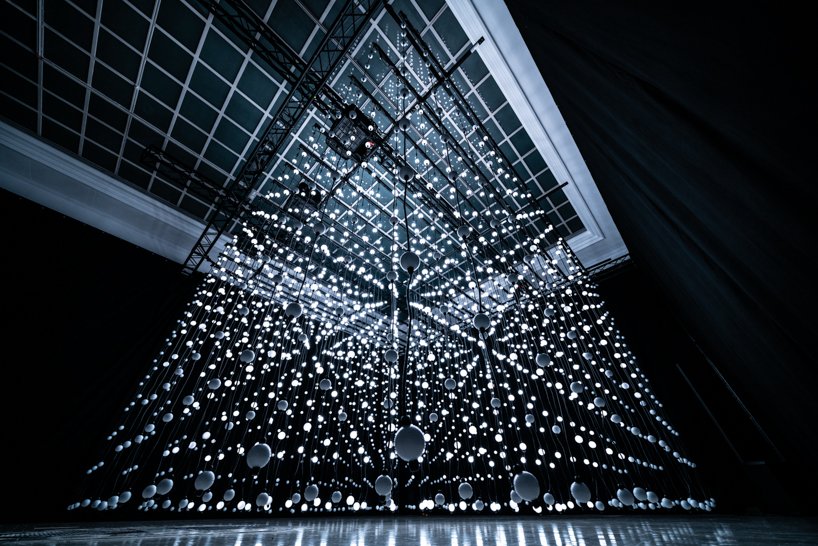 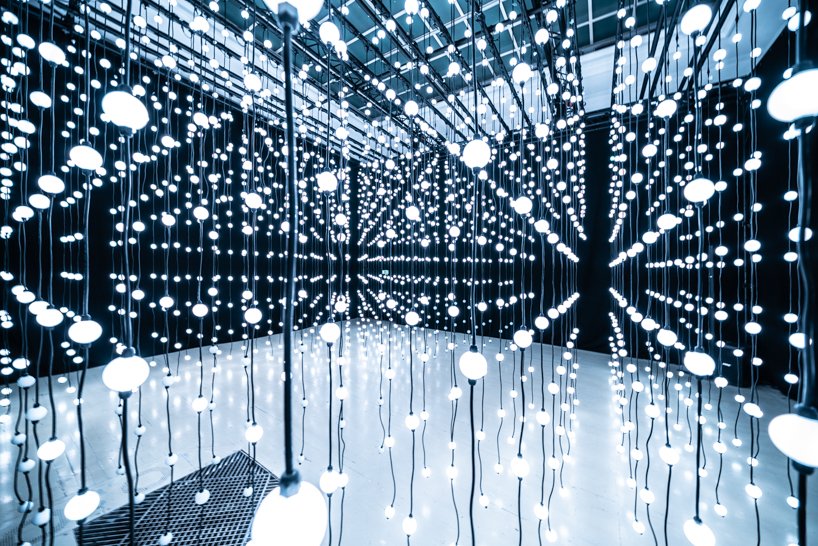 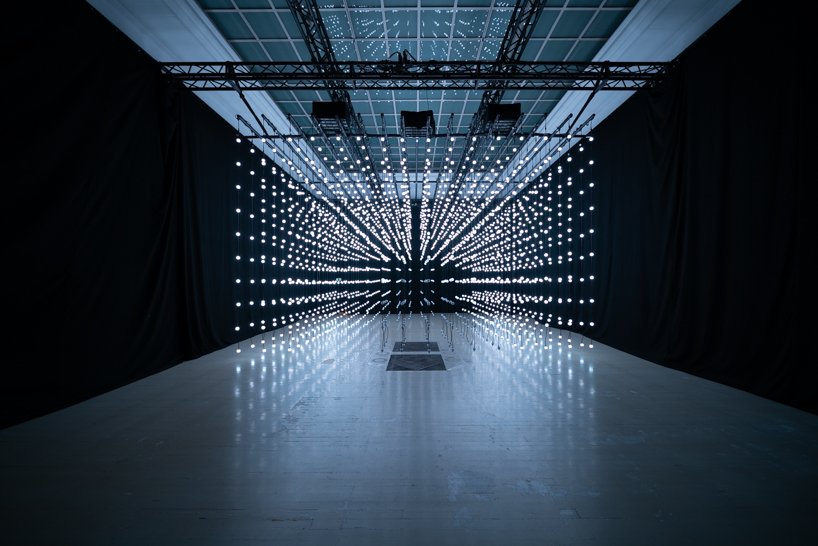 The founder of Infinite Archives, Isimeme “Easy” Otabor, recently opened his own contemporary art gallery called Anthony Gallery in central Chicago.
The opening exhibition of the gallery is titled “Unite Through Culture” and is centered on a partnership with the world-famous footwear and sportswear brand Jordan, with a look at the Retro Air Jordan 11 “Bred” whose official release date is next December 14. Inside the exhibition, there are numerous paintings depicting both the basketball player Michael Jordan and the shoes. Each painting at Unite Through Culture was created by different artists such as Kosuke Kawamura, Corey Black, Matt McCormick, George Bayliss, ADE Makinde, Wu Yue and Jacob Rochester. Their works honor and meticulously interpret His Airness‘ athletic career, particularly in 1996, when he played with the original Air Jordan 11 “Bred” sneaker. The latter is present in multiple pairs in an installation. All Air Jordan’s are connected to the ceiling by laces.

During the opening event of the gallery, a corner was inserted where it was possible to purchase the official merchandising, the proceeds of which were donated to an art and athletics program at the high school of Otabor, Hillcrest High School. 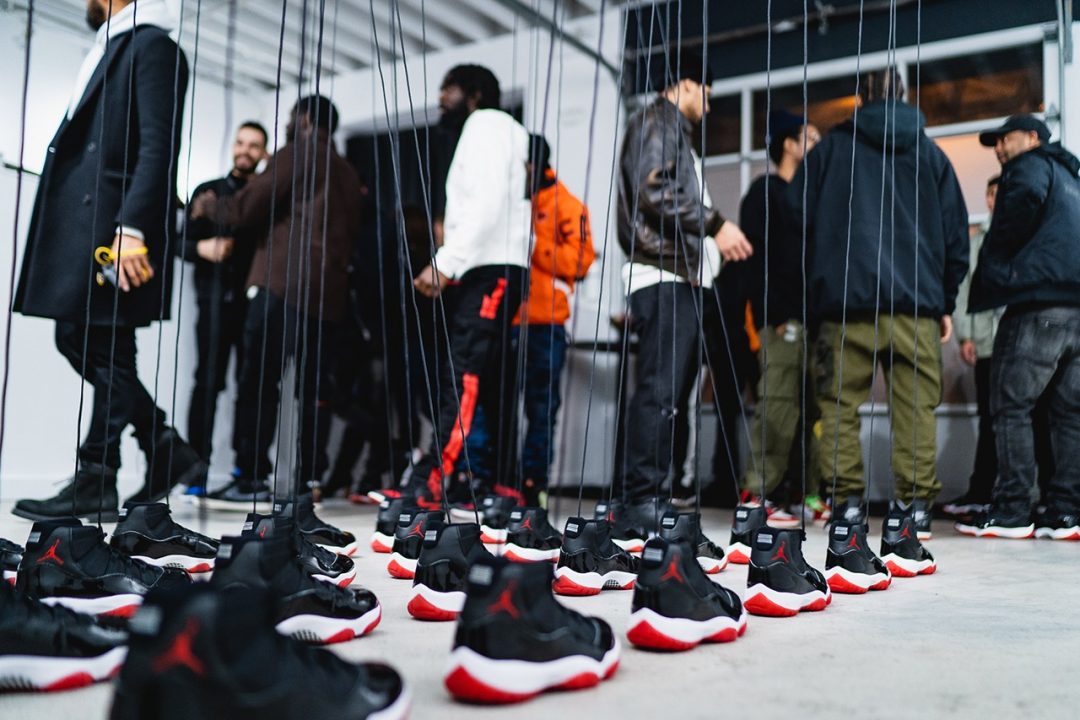 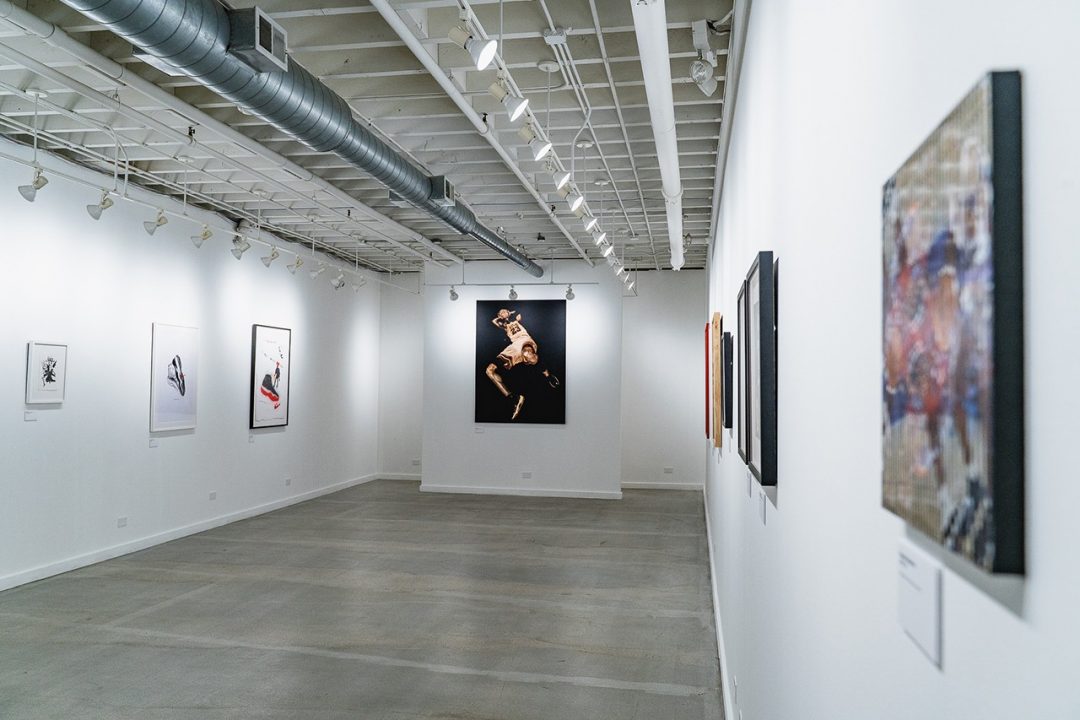 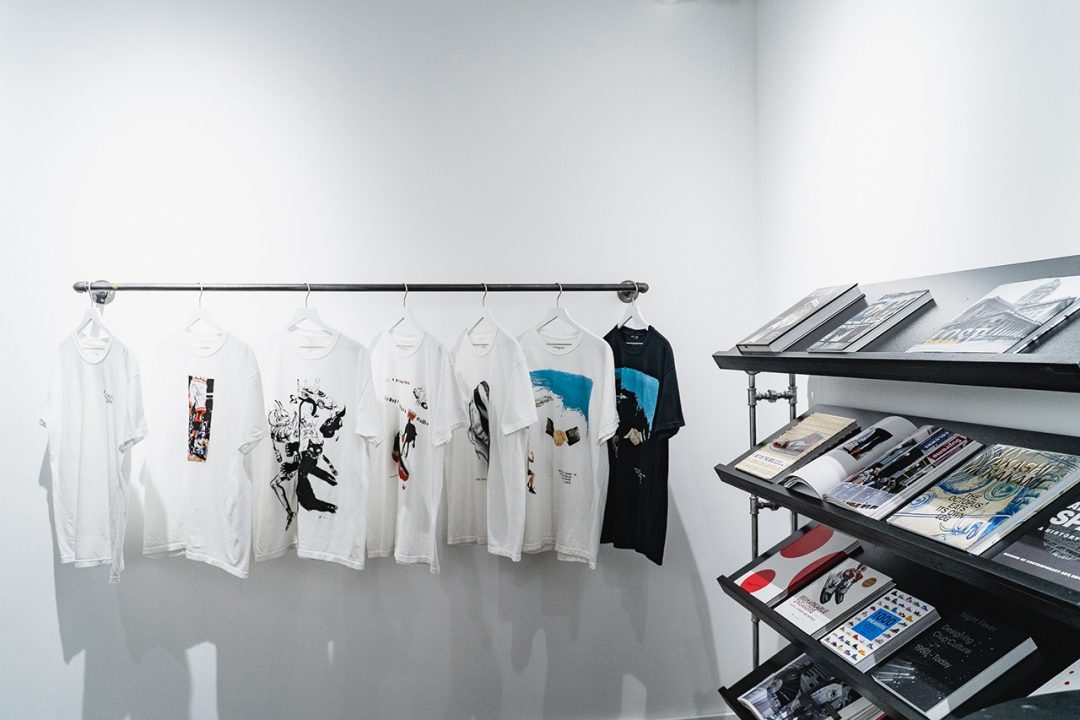 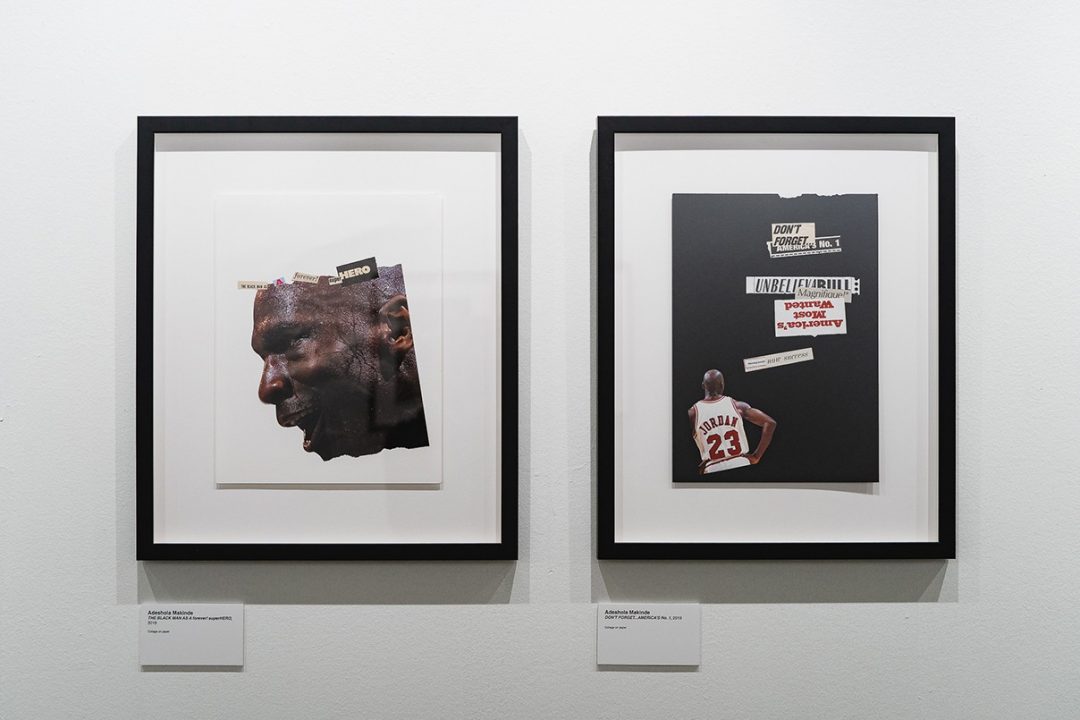 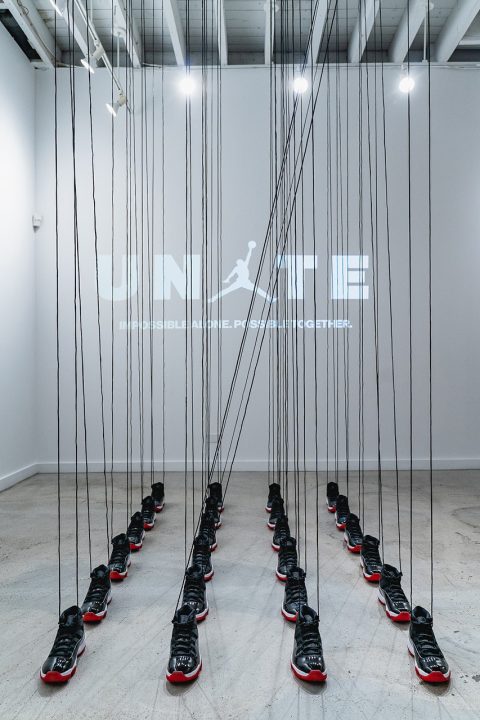 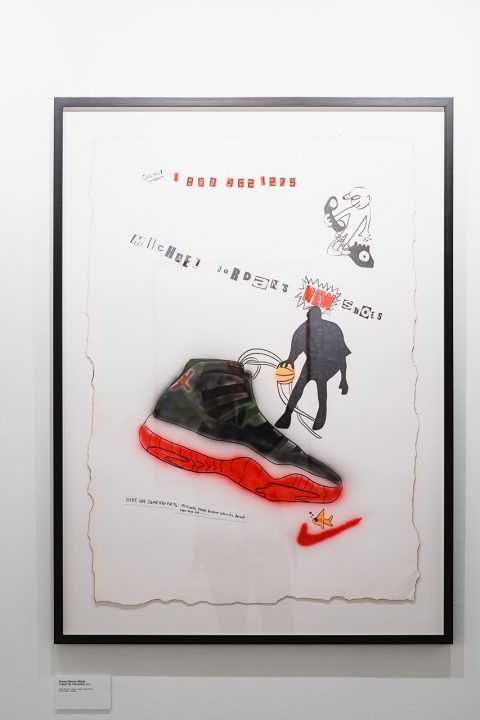 Unite Through Culture, the exhibition by Isimeme Otabor

On 5 December last, in Washington D.C. – in the United States -, a new iridescent installation called Atomic was inaugurated by Hou De Sousa, a New York-based studio of architects, art and design that promotes innovative, culturally advanced and environmentally friendly solutions.
Atomic is made up of many colorful hula hoops made of fabric and mesh. This installation was designed and built to celebrate the particles that shape our universe and fill an infinite void of energy and light.

The work is on display until January 5, 2020, and is part of Georgetown Glow, an annual festival of light art. The studio Hou de Sousa has previously exhibited one of his creations during the 2018-19 season entitled “Prismatic“.

Given Atomic’s proximity to Grace Church, the multi-colored facets of the installation were designed to establish a contextual link with the windows of the adjacent building.

In addition, Hou De Sousa has created an “atomic” result with reference to the bokeh effect – a phenomenon that occurs when light points are photographed out of focus. Fixed to a custom nylon mesh, the spectrum of colored circles seems to float in mid-air, creating an eye-catching work that illuminates the area during the dark winter months. 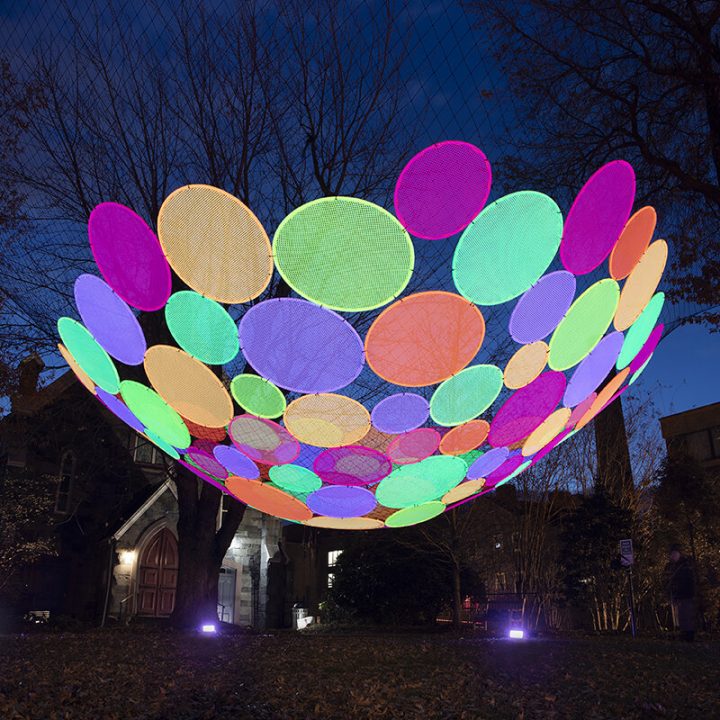 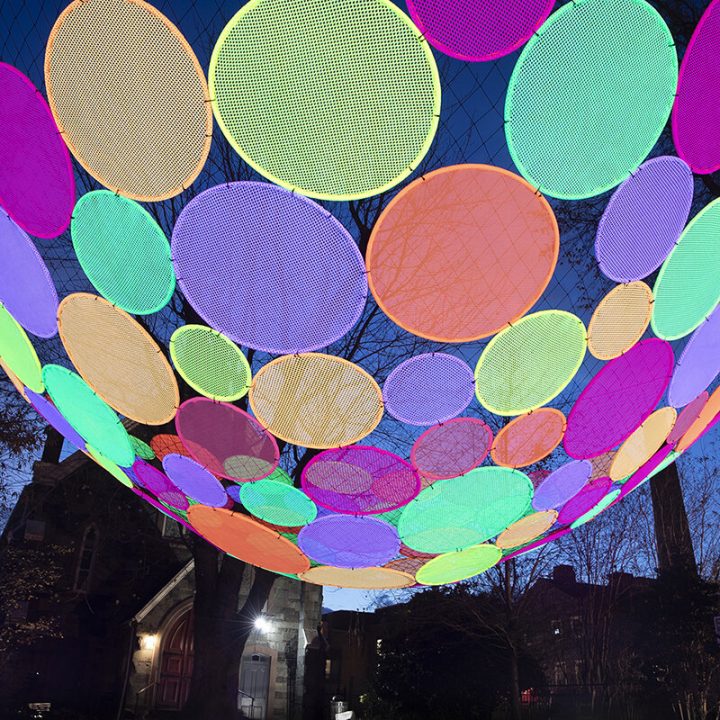 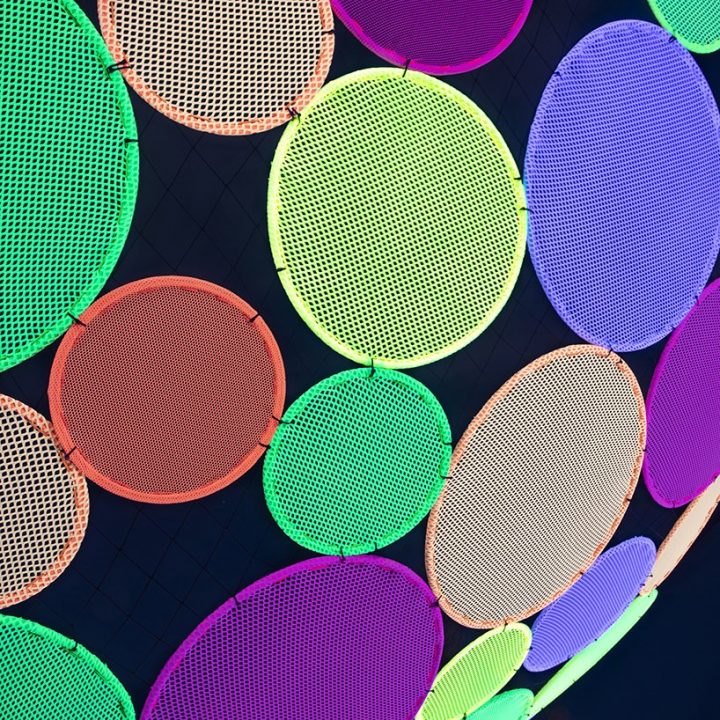 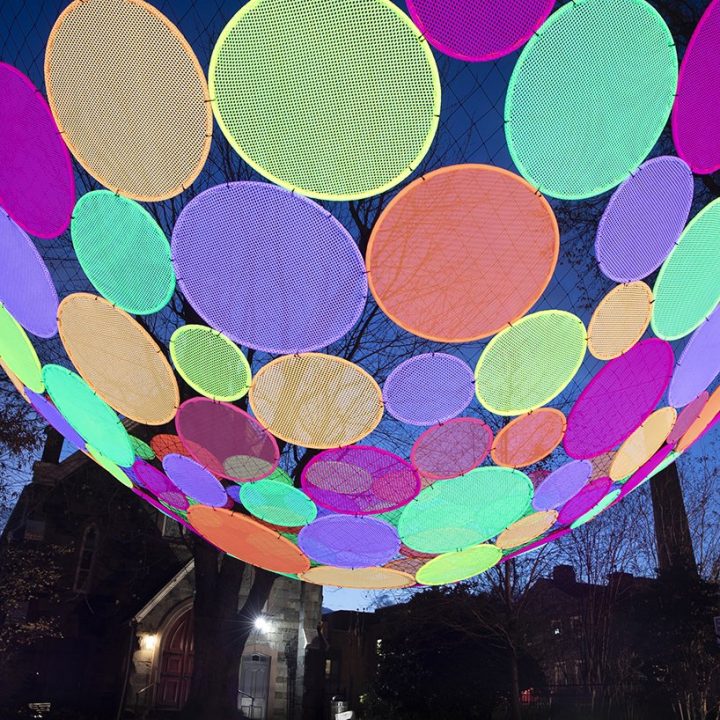