Without fear of being contradicted, I feel like saying that the fashion world in 2021 has been strongly characterized by collaborations, to put it mildly. An unprecedented number of joint ventures have marked a new approach, a new narrative on the part of even the high fashion houses that, unlike in the past, have pushed much harder on partnerships. We also witnessed a phenomenon that had never occurred before: the mash up between two high fashion players. But let’s go step by step.

Grassroots collaborations have always been seen as a chance to unleash creativity, pushing the boundaries in which brands are often confined. Clearly, there is also the economic side of the matter, thanks to which smaller brands or brands that may be going through a period of decline – both in sales and appeal – can enjoy the reflected light of the larger brand with which they join forces.

However, 2021 saw the overcoming of this established dynamic and the green light was given to a new form of collaboration/partnership, that between big brands.

Versace with Fendi, the hacking project of Balenciaga and Gucci, Dior and Sacai, the creative binomial between Miuccia Prada and Raf Simons are just some of the examples of this new direction that seems to bet everything, more than on creativity, on the dynamics that dominate the fashion system, which are the same that dictate the timing of our everyday life and our work in many cases, the hyper-fast and immediate ones of social networks. I think it’s rhetorical to mention the economic issue again, since this part is always the most important of all: brands must bring in revenues and collaborations are always a very useful viaticum.

In the last year we have witnessed a sort of polarization of fashion towards the hype that has inexorably bent the logic and timing of the fashion system, much more than the pandemic, but we will come back to this. A constant need for novelty that however clashes with the very concept of creativity.

It is no coincidence that, for example, Fendi and Versace presented their collaboration only a few days after their respective Spring/Summer 2022 fashion shows. An apparent overload in full countertendency with what the entire fashion world had set for itself at the outbreak of the pandemic: normalization of the production cycle, a stop to the 4 annual collections, single shows for both men’s and women’s collections. It all seems to have been forgotten – I’m not generalizing, I’m clearly talking about a trend – because of the need to respond to an economic system that instead pushes harder and harder and demands the maximum, always.

A short circuit that, also in light of the latest news on the development of the pandemic that still sees us hostages, reflects the vanity and market logic of the large international luxury groups that own the most important brands such as Kering (Gucci, Yves Saint Laurent, Balenciaga, Alexander McQueen, Bottega Veneta, etc.) and LVMH (Louis Vuitton, Christian Dior, Fendi, Céline, Marc Jacobs, Givenchy, Kenzo, Loro Piana, etc.).

All this, however, does not take away from the fact that the emotional part that is solicited when we learn of a new collaboration between two big players, or between two streetwear brands, continues to release that massive dose of endorphins against which there is little we can do. The writer is an enthusiast, a lover of this world and for this very reason the fact that I like many things does not necessarily mean that they are innovative, ethical, sensible or reflect a kind of broad coherence. You can also sit back, observe and enjoy them, but in a context like the contemporary one, it doesn’t hurt to pull out your critical spirit every now and then, no matter what.
Fashion is an industry and today it is also entertainment and as such it moves, right or wrong (according to everyone’s personal thought) and it should be evaluated also keeping in mind the dynamics in place.

I’ll end by saying that the noise of collaborations this 2021 was loud, like we didn’t expect and like we’ve never heard before. I hope that 2022 will be characterized by softer, less shouted sounds (but this remains my very personal wish) and that the fashion industry will ask itself a question: did we need this?

2021 was the short-circuit of collaborations

When the pandemic exploded inexorably in early 2020, many museums and exhibitions had to adapt to the physical impossibility of patrons physically going to admire the works on display. One effective response, at least to give people a chance to entertain themselves with art despite the quarantine, was virtual tours.

The virtual tour of Palazzo Pucci, a sensory experience born from an idea of Laudomia Pucci, the “prince of prints”, one of the most brilliant and eclectic characters of the Italian and international fashion world, has recently debuted along these lines. Designer, multi-decorated Italian politician, air force ace and expert skier – to the point of being selected by the Olympic national ski team and participating in the 1936 Winter Olympics – Emilio Pucci represents that Italian eclecticism of the beginning of the century that has distinguished the history of Italy.

A virtual tour inside the Emilio Pucci Heirtage Lab where many of Pucci’s projects and works are kept.
“If people can’t come to us, why don’t we go to them”, said Laudomia Pucci who, together with her collaborators and Polimoda students, chose what to tell during the tour: stories, objects, drawings and much more.

If you feel like learning more about the history of Emilio Pucci, in addition to reading the in-depth article we dedicated to him, you can click here and start your tour now. Have fun!

You can visit Palazzo Pucci from your sofa

There is a strange wave of nostalgia that seems to have settled over everything. The ’80s and ’90s are becoming increasingly fashionable again, both among those who lived through them and for the younger generations who are attracted by a period that is not so distant, but so different that it sometimes seems impossible that it really existed.

Those were the years when freedom of expression came in all forms: music no longer knew any rules, new looks in which Dr. Martens boots ruled the streets, which in turn were covered in writings and drawings made with spray cans. Acts of healthy rebellion by an increasingly aware generation that have created a link between distant places, a fil rouge that has united London, New York, Paris and many other cities. Milan too began to be populated by urban artists ready to leave their tags everywhere.

It was in this climate that Prosa Bang, an Italian street artist who took his first steps in the world of writing, was born and grew as an artist.

After collecting national and international successes, participating in various festivals and being active in the dissemination of “graffiti culture”, Prosa Bang now closes a circle that began almost twenty years ago.

In fact, on the occasion of the opening of Dr. Martens’ first Milanese store in via Torino 49 today, 22 December, the artist was chosen to create an artwork that unites and celebrates both the world of graffiti and that of the English brand, and without even realising it takes us back to those years that we miss so much.
Prosa Bang’s wall recalls the world of Dr. Martens in every single detail and will be the backdrop for all the silhouettes that have been part of the brand’s history since 1901 and that will always be available in store. 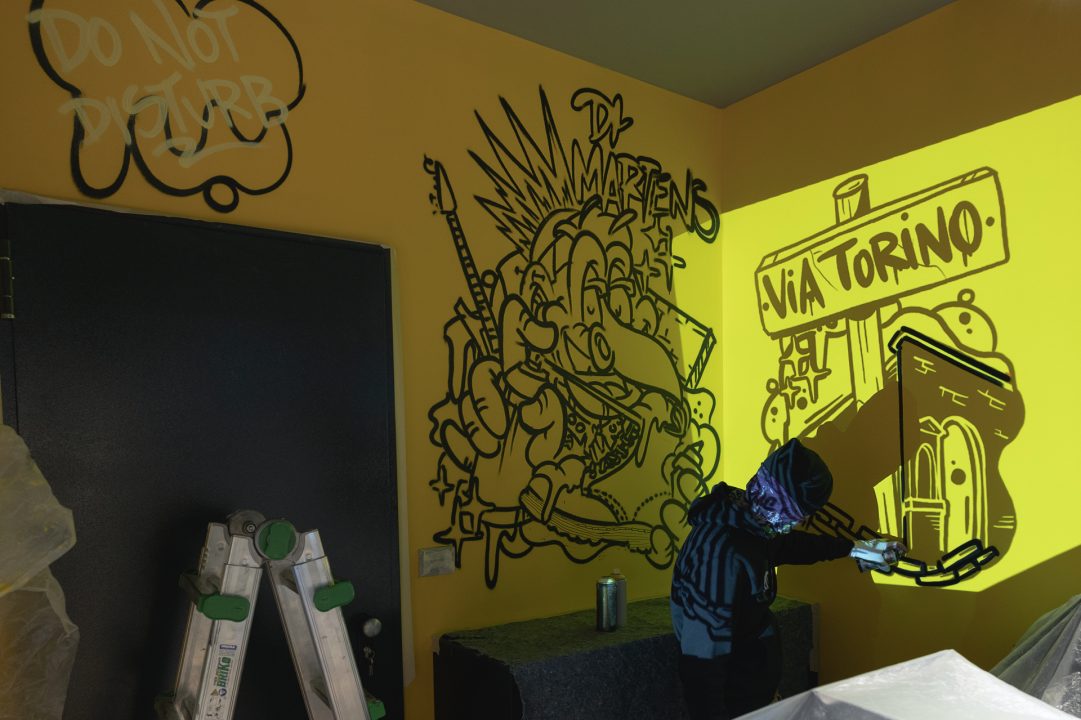 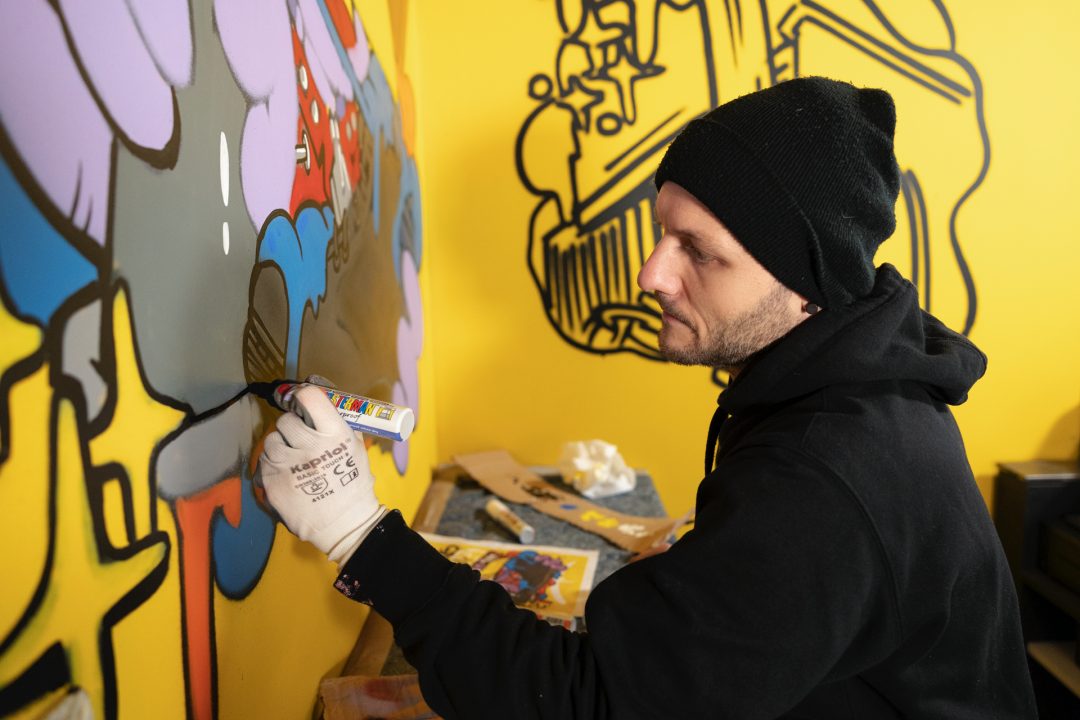 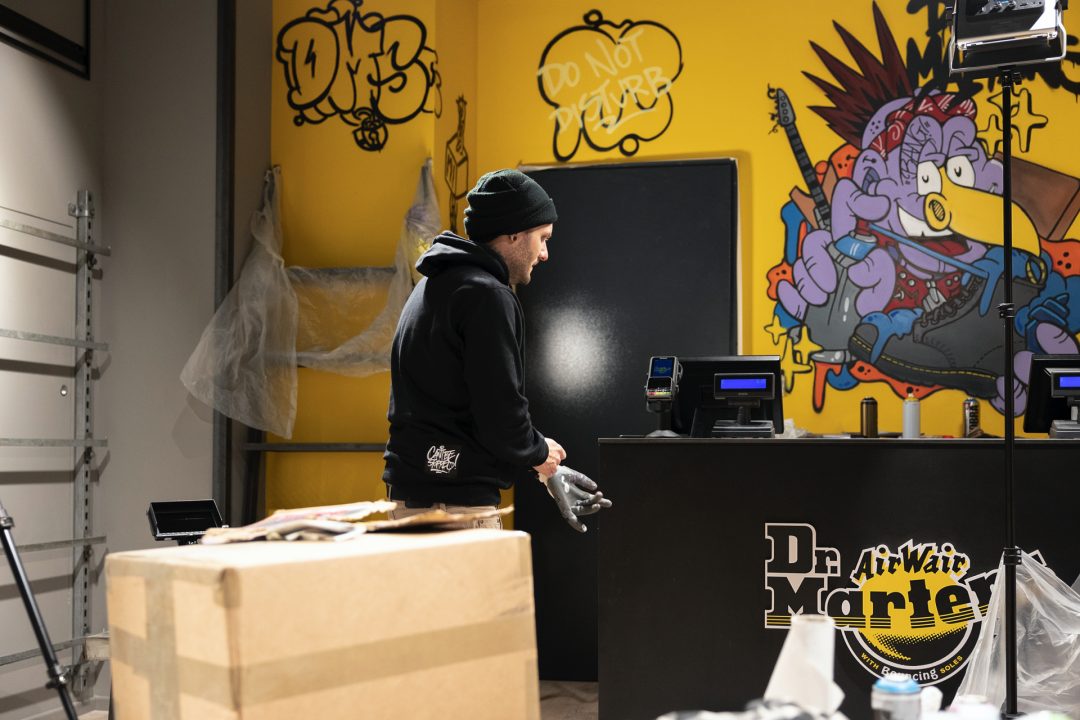 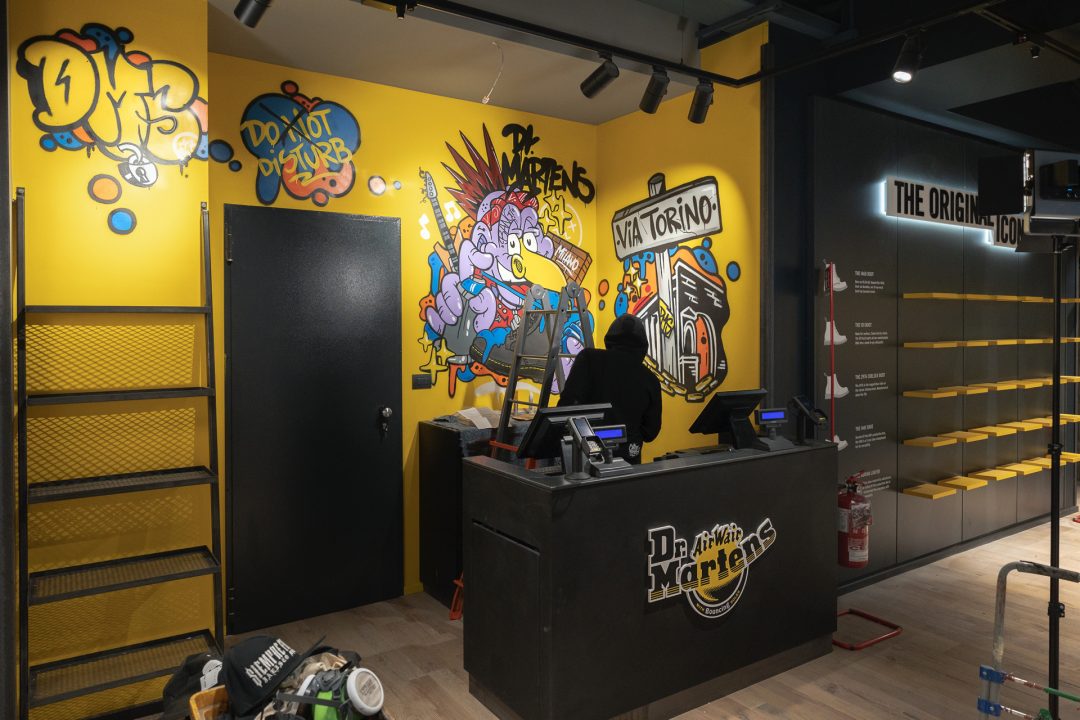 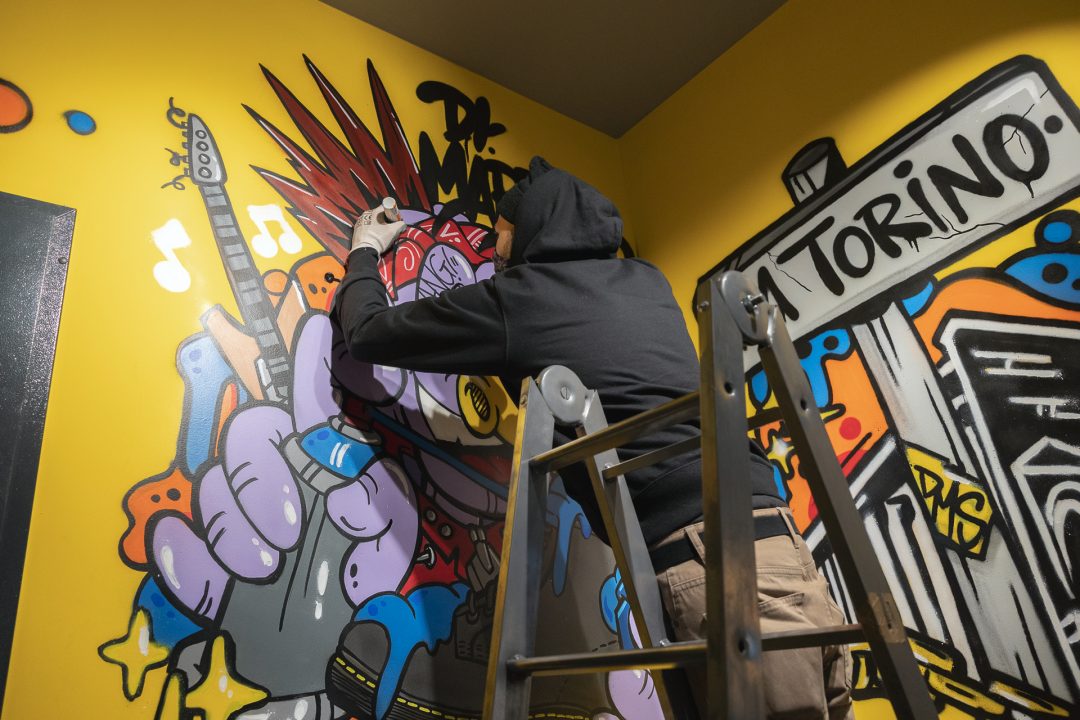 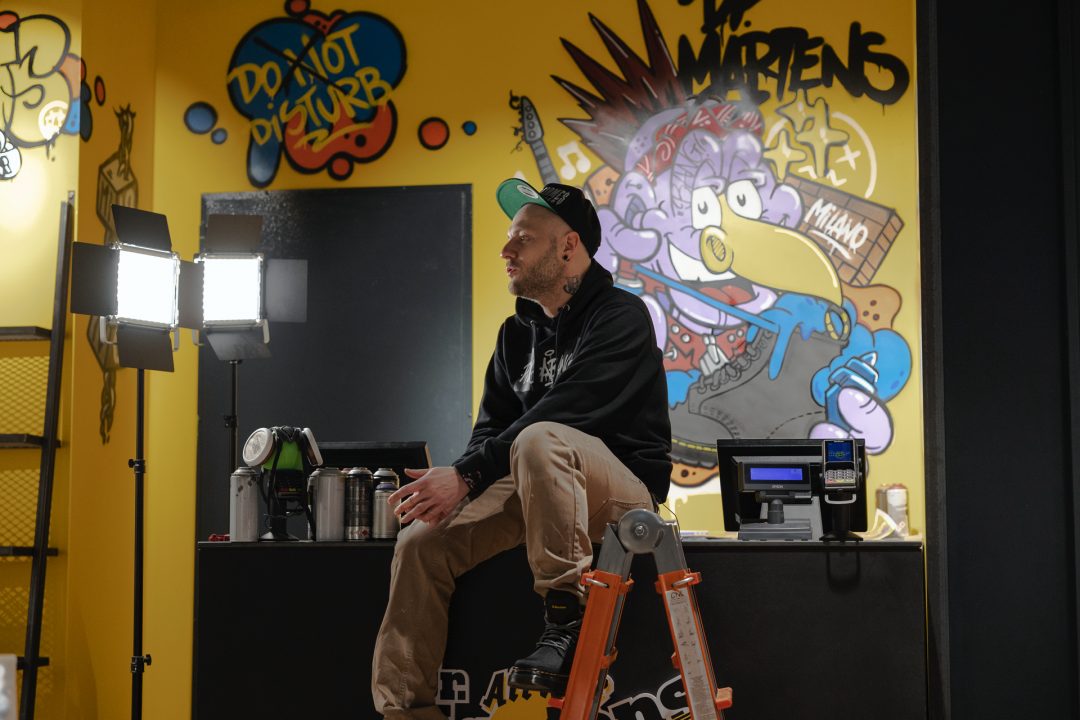 From the timeless Boot 1460, which at the end of the last century became the protagonist of all those cultural, musical and artistic movements that revolutionized society from below, to the most modern sandals and loafers that maintain a well-defined character, but adapt to changes and new needs and styles.
With this new Italian opening – which follows those in Rome and Verona – Dr. Martens presents itself as a guide for all those who are not afraid to dare, who express themselves and their values through fashion and what they wear.

We at Collater.al had a chat with Prosa Bang, who sat down in front of our cameras and told us more about what inspired him to do this work. Don’t miss the video interview below and stop by the new Dr. Martens store in via Torino to see his artwork.

Dr. Martens opens in Milan, between street art and the ’90s

Yesterday Supreme presented, as usual at this time of year, the Fall 2021 graphic tees, thus closing the winter season.

As often happens, the skate brand founded by James Jebbia has decided to pay homage through the graphics of the tee to an artist whose style, philosophy and impact follows the same concepts that have inspired the brand since its inception in 1994.

81 years old and not feeling it. Al Pacino is the face of the new Saint Laurent campaign.
The creative director of the fashion house Anthony Vaccarello has chosen the legendary Italian-American actor as the brand’s new testimonial, commenting: “So proud. Love forever to AL PACINO. Thank you so much”.

Il The protagonist of unforgettable films such as Scarface, The Godfather, Any Given Sunday – just to name three – is currently in theaters with House of Gucci, Ridley Scott’s film that, apparently, is not meeting with the favor of critics and audiences.

The campaign was shot by renowned British photographer and filmmaker David Sims, known for consistently pushing the boundaries of fashion photography with his distinctive approach, becoming a benchmark for an entire generation of photographers.

In the black-and-white photo posted on social by Saint Laurent and Anthony Vaccarello, Al Pacino wears a black pinstripe suit featuring a metallic finish and a knot-and-bow blouse that perfectly reflects the legacy and unique aesthetic of the French fashion house.