@milkformycoconut is the name of the Ig account of Mateja Petkovic, pioneer of digital art and master of oil painting on canvas. Originally from Serbia, he now lives and works in Munich, a city from which all his works come to life and emigrate online to all parts of the world.

Digital art, born in the 50s, is now extremely widespread among many artists thanks to the progress of technologies that immediately recreate more complex painting techniques.

Also for this reason Coconut, although he continues to make oil paintings, over the years has defined his style with extremely distinctive and unique features.

The color has an evocative and emotional value for him, extremely important because thanks to tonalism technique, he’s alble to obtain effects of light, shadows, depth and give his works an extremely subversive tone.

He deals openly with issues related to sexuality and almost to the limit of pornography, others also deal with extremely topical issues such as drug addiction and abuse. In each of his works we find the most degraded aspect of everyday life but he reserves for his subjects sweetness and innocence, expressed almost exclusively in the portraits.

104,000 luminescent stones to remember 104,000 victims. This is the idea behind Levenslicht, the latest installation designed and realized by studio Roosegaarde, a real monument in memory of the victims of the Holocaust in Holland.

Made visible to the public only a few days ago in Rotterdam, Levenslicht’s presentation falls in the year of the 75th anniversary of the end of World War II and with it the liberation of Auschwitz concentration camp, a symbol of the holocaust, anti-Semitism, and deprivation of freedom.

In Holland, there were, in fact, 104 thousand people, including Jews, Roma, and Sinti, who were deported and lost their lives in a concentration camp and to pay homage to each of them, the creatives of the Roosegaarde studio thought of a work composed of as many stones made in a laboratory with fluorescent pigments that are illuminated by ultraviolet light. Every few seconds, therefore, the stones radiate a strong blue light and then turn off a few moments later, thus continuing indefinitely, both day and night.

The choice to use stones comes from the Jewish tradition of placing a stone on the toma of the deceased and not the classic flowers.

Levenslicht will remain in Rotterdam until January 22nd, after which it will be moved to 170 municipalities in the Netherlands. 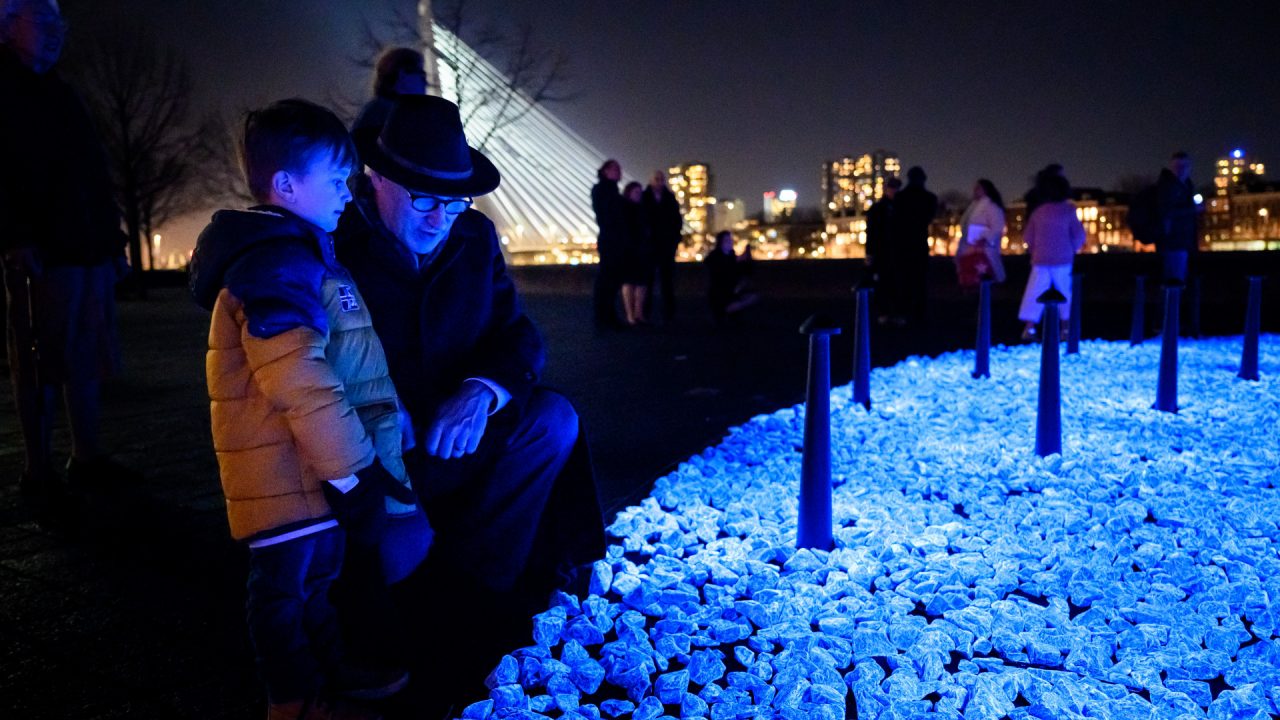 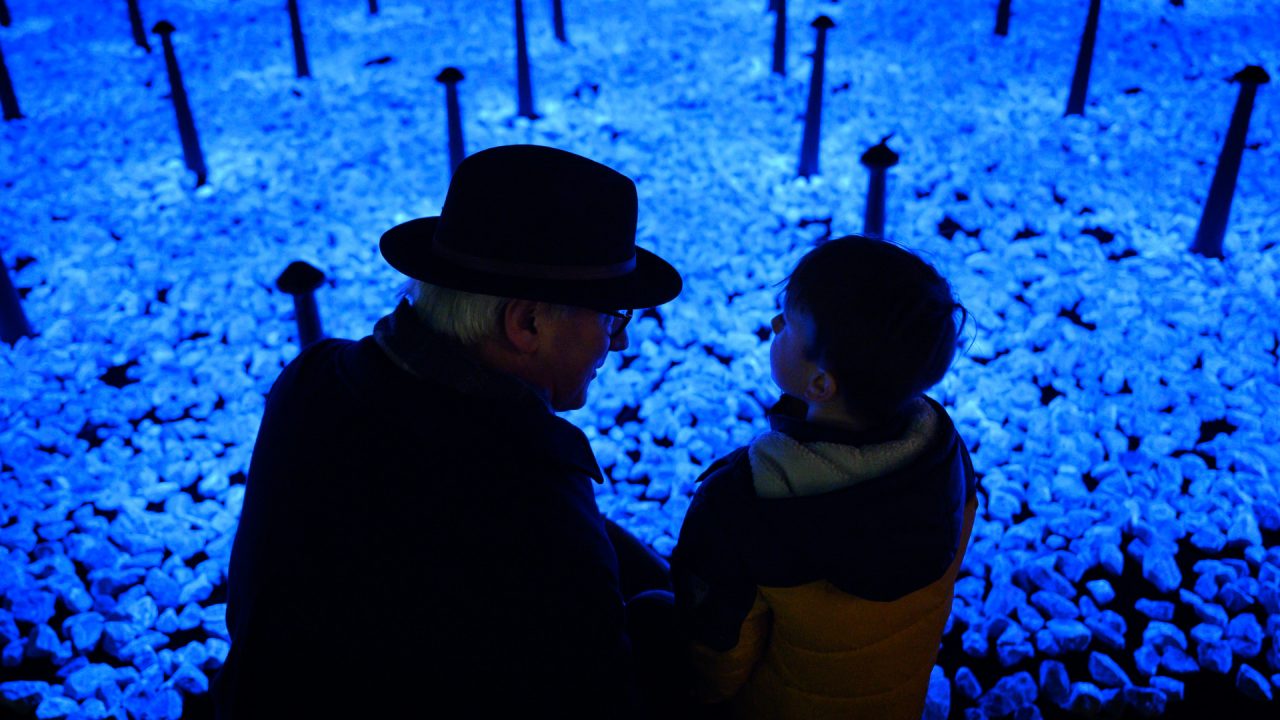 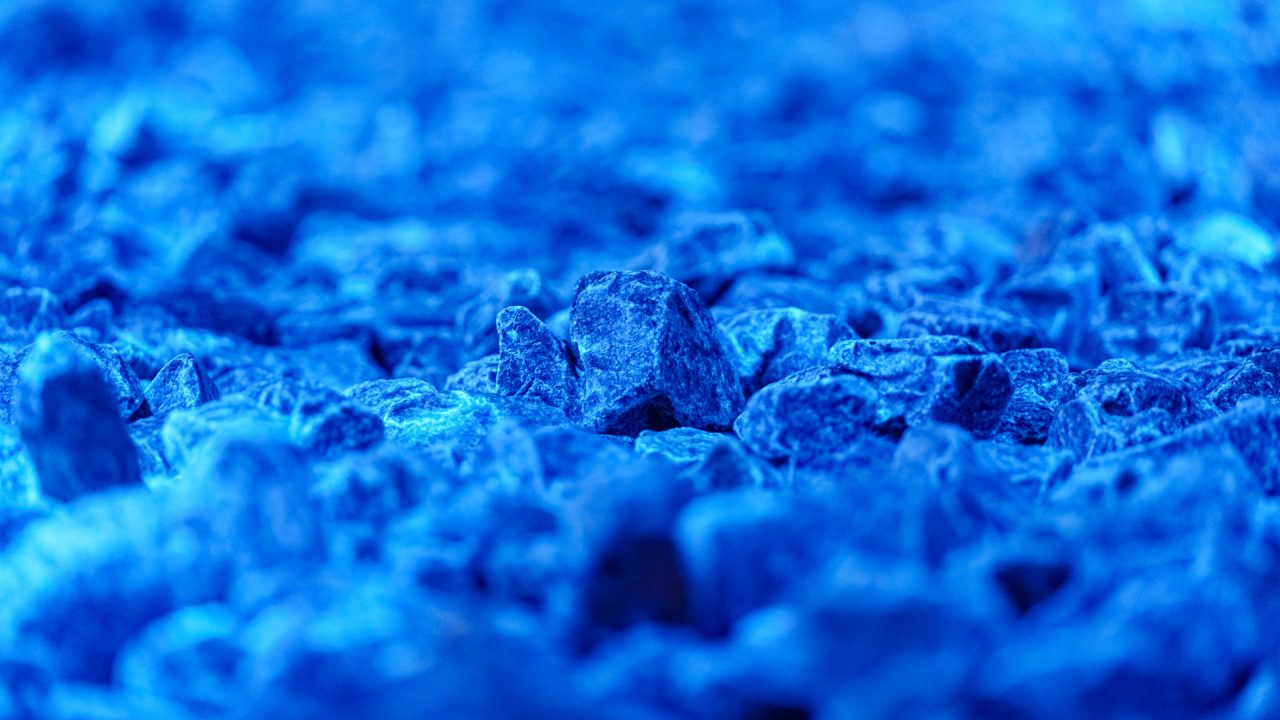 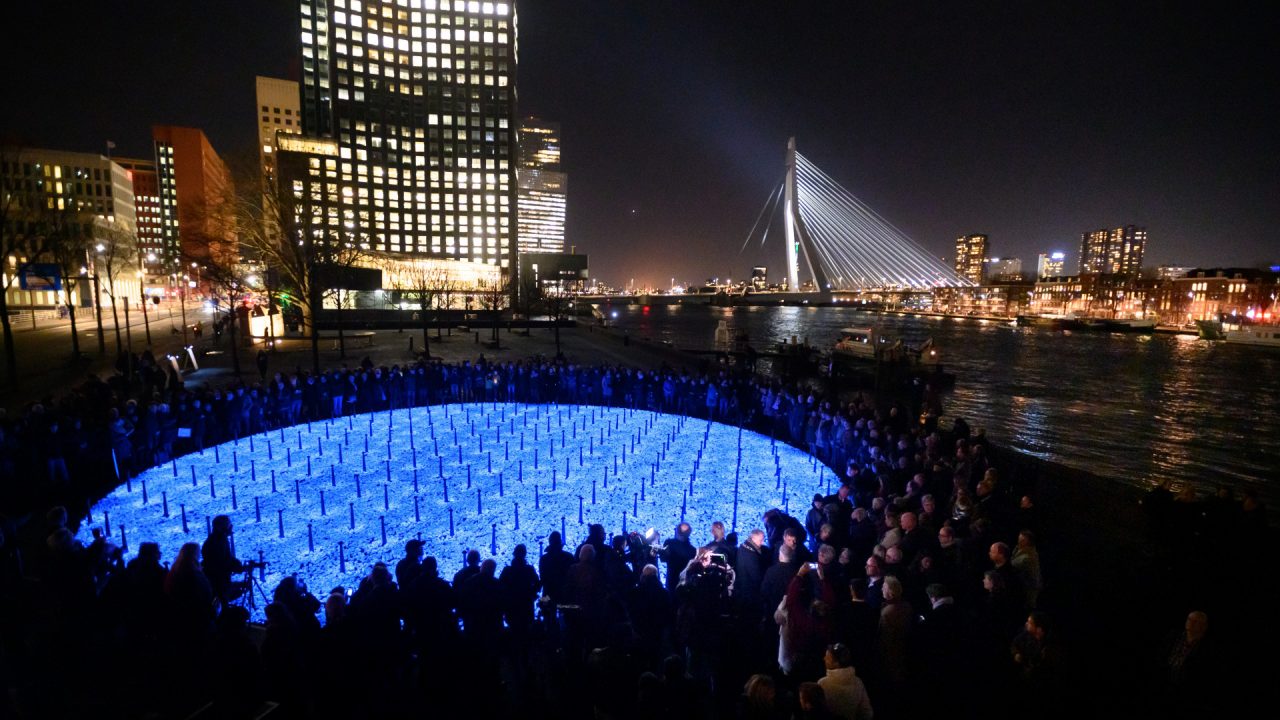 Jasmin Meier, also known as Harley and J, is an Australian illustrator who lives in Byron Bay, a seaside town overlooking the Coral Sea. Here Jasmin spends her days creating illustrations that seem to have come out of the 60s and 70s, with subjects that bring to mind the period when the so-called “children of flowers” revolutionized the thinking of an entire era and whose ideals were perfectly suited to a precise aesthetic and look. Thus, Jasmin Meier’s works are dotted with naked girls immersed in floral and eclectic universes, with a stylistic choice inspired by Art Nouveau, from artists such as Alan Forbes, Gustav Klimt, Alphonse Mucha, and many others.

Jasmin Meier has managed to transform a passion transmitted to her by her mother, also an illustrator and painter, into her work. In fact, today, in addition to personal projects, Harley and J produces many posters, especially concert posters, characterized by the classic colored and bold writing of the posters of the ’60s.

Discover a selection of her works below and to find out more go to Harley and J’s website and Instagram profile. 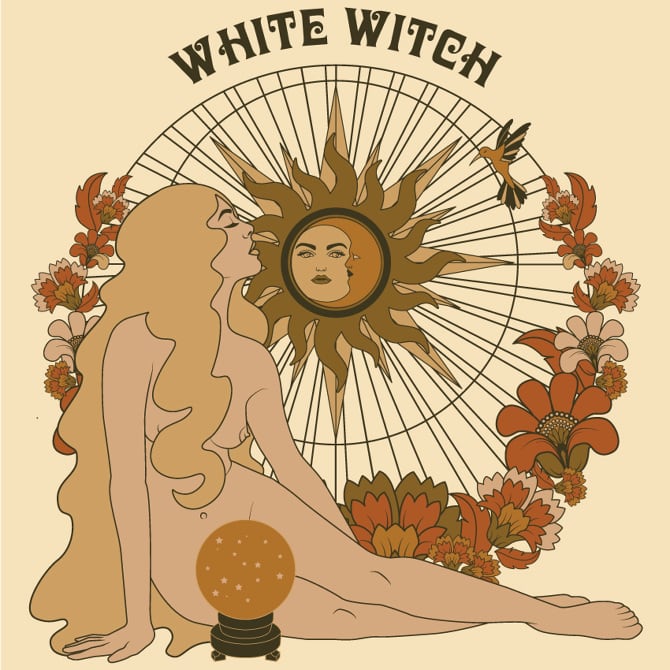 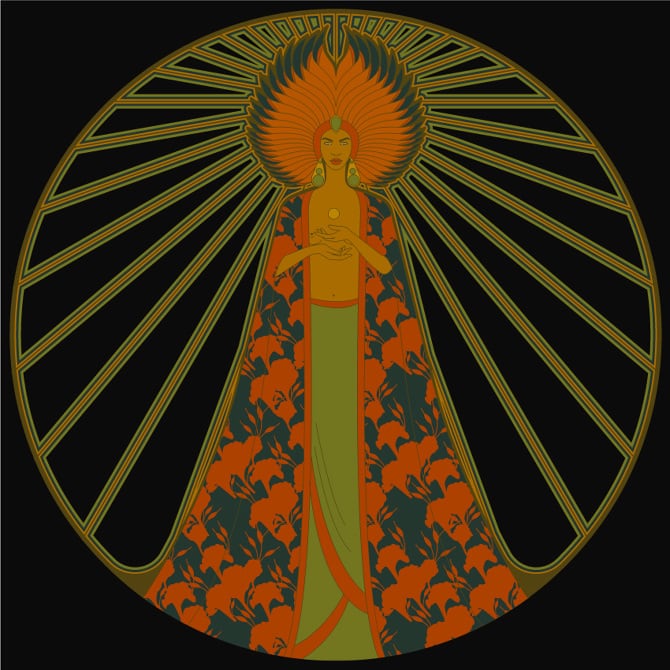 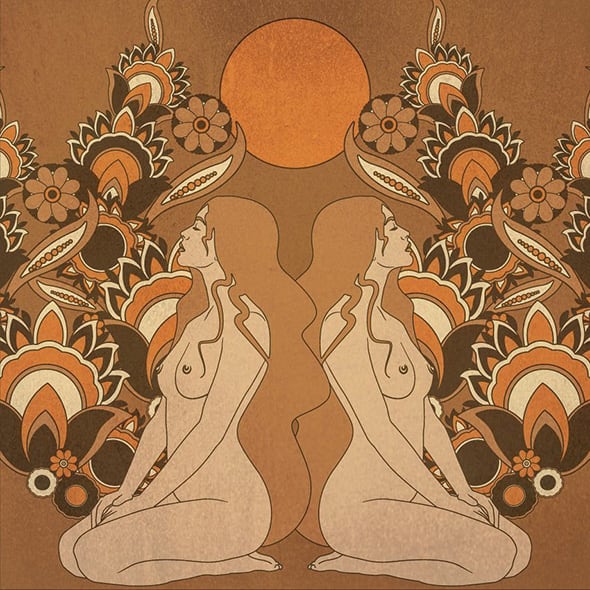 Jasmin Meier and her psychedelic illustrations

Those of Anne-Christine Roda are not only perfect reproductions of female faces and bodies. That doesn’t seem to be what interests you. Rather, her meticulous care seems to want to give us back an image of humanity, vital and melancholic.

Her work seems to go in a completely different direction from the hyperrealism of the 70s derived from pop art, from the cancellation of subjectivity. What transpires is in fact a precise individuality, intimate nudity. Each brushstroke seems to want to prolong the frozen instant, making us savor every nuance, every little expression of its subjects.

The accuracy of the details of each of her works becomes a celebration of uniqueness, an emotional tribute to imperfection.

Inside the Moxy East Village hotel in New York, more precisely suspended in the center of the Cathédrale restaurant, stands Fillmore, the first work by Tresoldi Studio.

The hotel, designed by Rockwell Group, is a tribute to the East Village, its historicity and its importance for all the artistic and musical movements of the 1960s, while the Cathédrale, on the other hand, finds its inspiration in the legendary Fillmore East concert hall where, among many others, artists of the caliber of Janis Joplin, Frank Zappa and the Doors have performed.

Tresoldi’s installation stands out in the central hall of the restaurant, an ethereal presence that embellishes the entire venue even more.
The sculpture, with a six-meter deep dome that favors games of full and empty spaces, is a tribute to the cultural underground that has influenced several generations around the world, including the New Yorker generation.

The sculpture, thanks to its volumetric and visual characteristics and the use of different materials, has managed to give a place that is already highly artistic in itself an even more poetic and theatrical allure.