What hobby did you discover during the quarantine? Did you bake delicious cakes? Did you learn to play an instrument? Have you gone gardening? No matter what hobby you have invented, it will certainly never live up to Manami Sasaki‘s.

Manami is a Japanese artist who spent a good part of her time on the road to work before lockdown. Then, when she had to start working from home, she found herself having a lot of free time without knowing how to occupy it. In order not to lose her habits and maintain a routine, she continued to wake up early, transforming both breakfast time and her food into pure creativity.

In fact, if until then, Manami Sasaki sat at the table and distractedly spread butter and jam on a slice of bread, now on that same slice the artist gives life to true works of art.

But Manami’s toasts are not only beautiful, the artist herself has repeatedly stated that her creations are also balanced in taste because these finely decorated slices of bread remain to all intents and purposes her breakfast.

The artistic toasts of Manami Sasaki

In these last months several categories of workers have found themselves forced to stop and among them certainly stand out the artists who for a long time had to put a brake on their creativity, on the desire to achieve something.
Now, very slowly, the situation seems to resume its normal course and creatives all over the world can go back to making art. Among them, there is certainly Spidertag, who after a stop of 9 months, has returned to illuminate the streets with his neon murals from Sweden.

In the last few days, the urban art festival “Take Tomorrow Back” took place in the town of Söderhamn and, among the artists involved, Spidertag did a lot of talking about himself with his Interactive Neon Mural #9.

Since 2015, the Spanish street artist has made his way into the international art scene thanks to the discovery of a material that set him apart from all others: battery-powered neon cables.

Spidertag models the cables at will, placing them on entire facades of often abandoned buildings and then, at night, when each of them is illuminated with a different color the magic begins.

Spidertag and the new neon mural in Sweden

The documentary dedicated to Greta Thunberg is now coming out. The work is directed by Nathan Grossman from Sweden and will be premiered on Hulu on November 13, 2020.

The documentary will propose an intimate portrait of a teenager who has managed to shake the consciences of all, from ordinary citizens to politicians.
As an icon of the fight against climate change, it is impossible to forget the speech given at the United Nations Conference in 2018.

A film that went around the world, consecrating the activist, to the point of convincing Hulu to invest in making “I Am Greta”.

Not much is yet known about the documentary, but in theory, it should show us the more intimate side of the activist, highlighting how she is really dedicated to her ideals.

Waiting for the release, here is the trailer.

Watch the trailer of “I Am Greta”, the documentary about Greta Thunberg

As in many buildings in Turin, also inside the former Military Academy, behind Piazza Castello, there is a courtyard, a sort of secret garden. It is here that, since September 10, Tellas has been working on an artwork that aims to combine art and sport.
“Blooming Playground“, this is the title of the work created on the occasion of the reopening of ARTiglieria – Centro d’Arte Contemporanea and the start of the new edition of Paratissima 2020, which this year, with a new exhibition format, will host the works of independent artists in its spaces.

With this intervention, Tellas, a street artist known worldwide and known for his works that manage to blend natural and landscape elements with the place where the artwork is executed, presents us again a work focused on nature.
The basketball court of about 550 square meters has been transformed into a huge canvas and, inspired by the two maples in the center of the courtyard, the artist has created a new landscape around them.

“Blooming Playground” is a project promoted by PRS – Paratissima Produzioni & Servizi with the aim of creating a place frequented all year round, especially by young people, and where they can cultivate their creativity. Lorenzo Germark, CEO PRS said: “The choice of the artist, the naturalistic theme of the sketch and the decision to safeguard the trees are well defined choices of design direction dictated by the desire to integrate art in the urban context of the ARTiglieria“.

PMS Basketball collaborated with the initiative, whose president Luigi Lacidona enthusiastically commented on the participation in the project, stressing the link between culture and sport: “I believe that in their diversity, art and sport share the same social value: both are able to unite people and make them feel unique feelings and emotions“.
Among the partners there are also Elettrogruppo Zerouno and PPG Univer, the latter was fundamental for the realization of the mural as it provided Tellas with the necessary material, such as products based on special acrylic resins and micronized fillers, perfect to be used on surfaces such as asphalt.

“Blooming Playground” will be inaugurated on Thursday, September 24th and will be the background for the different activities and initiatives scheduled during the year. 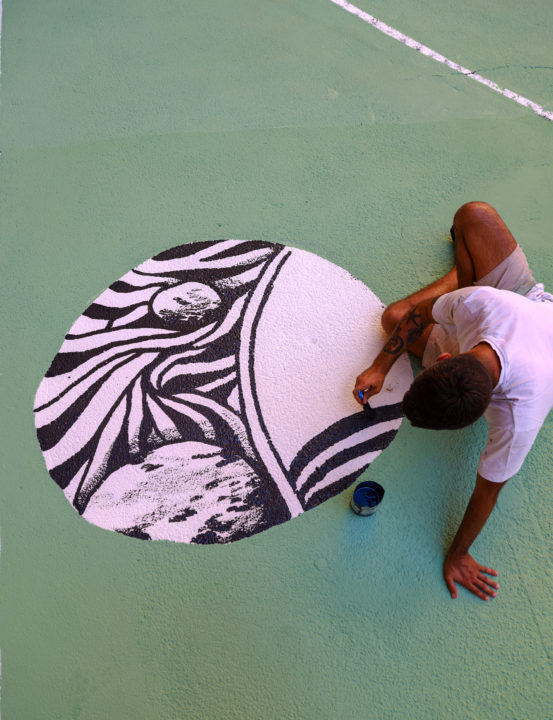 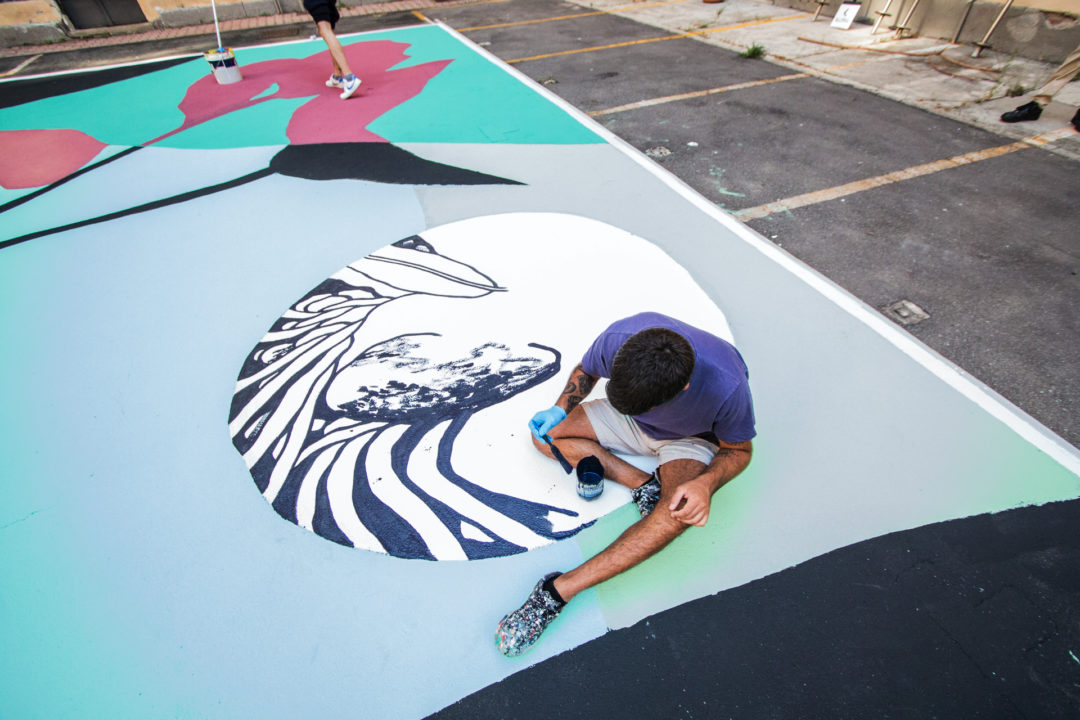 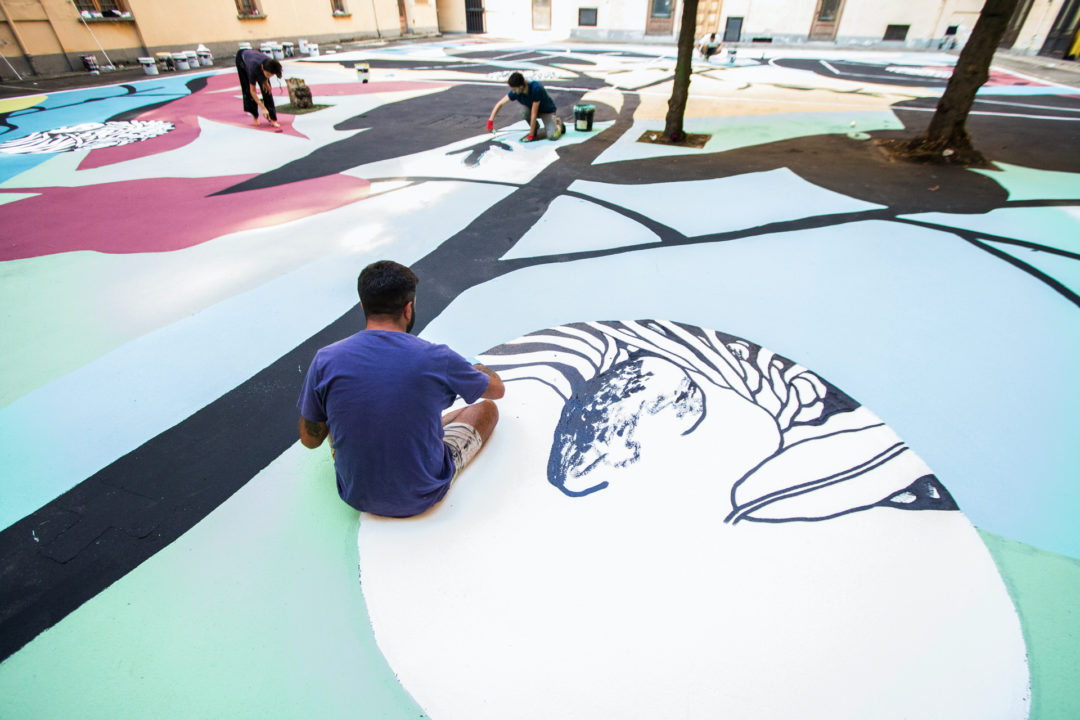 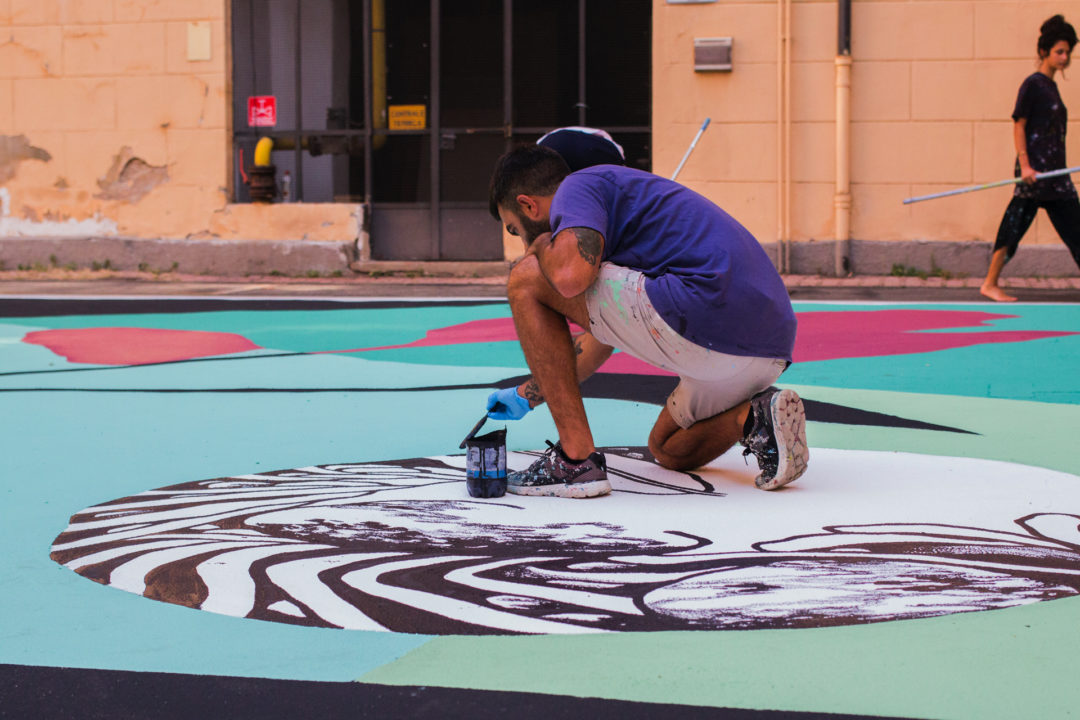 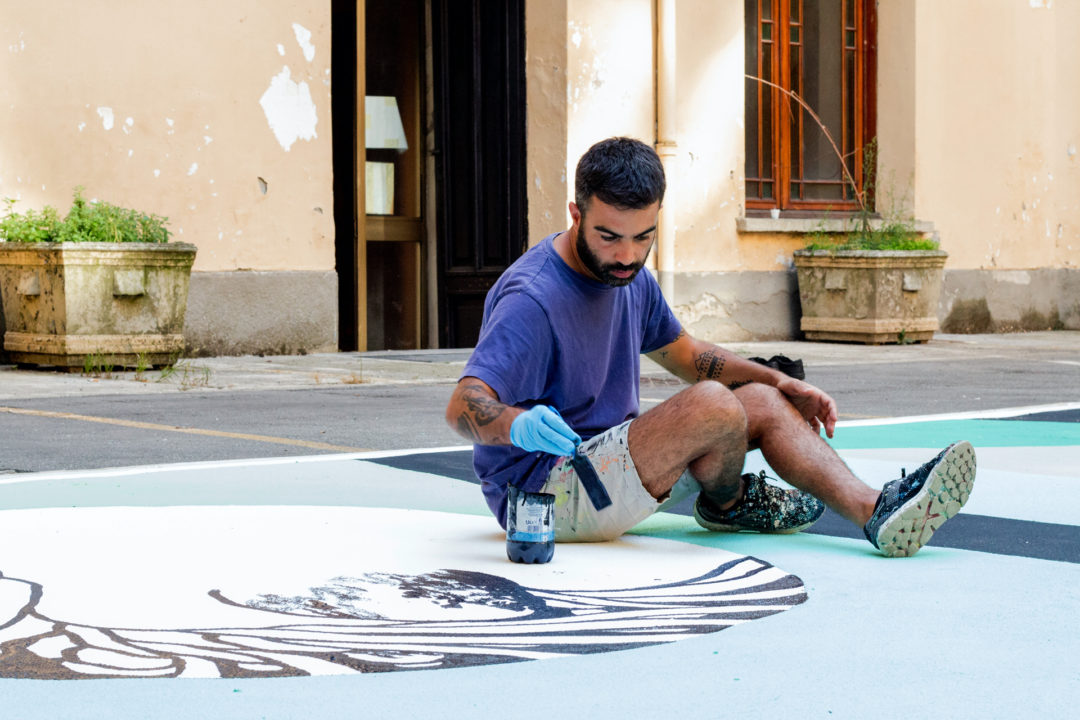 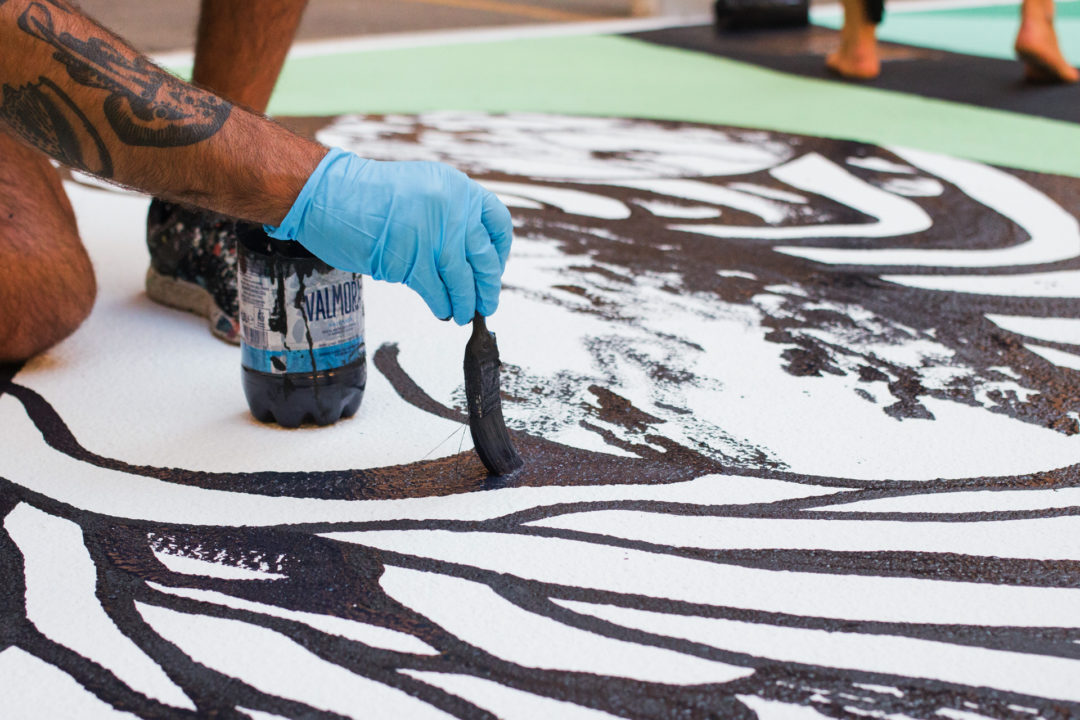 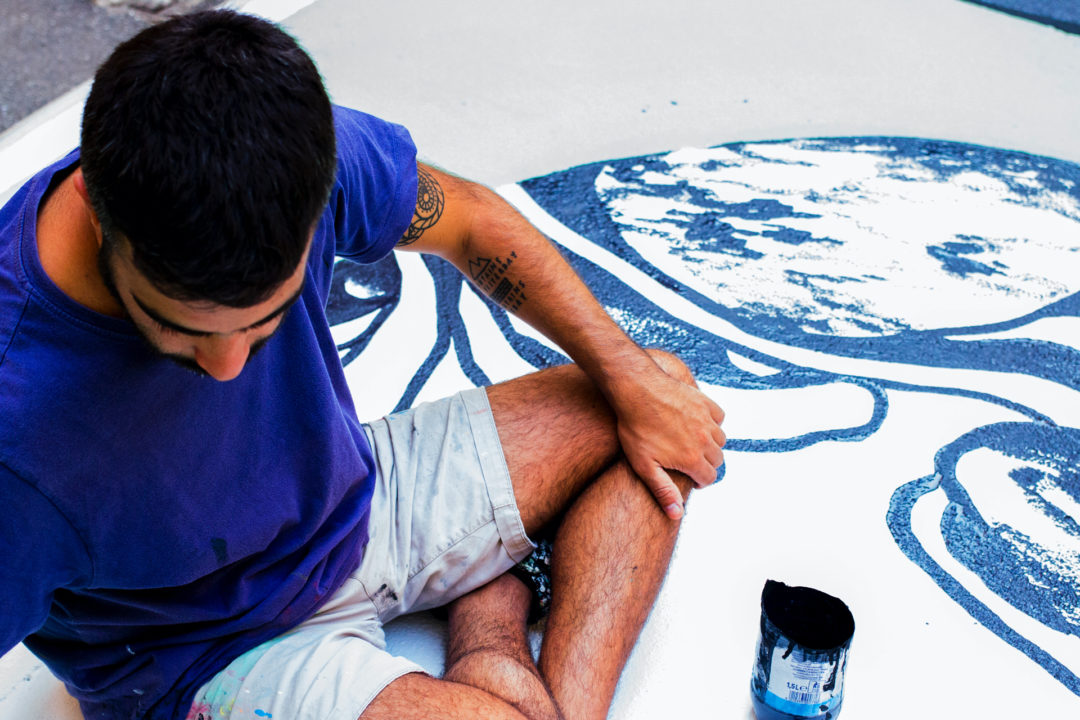 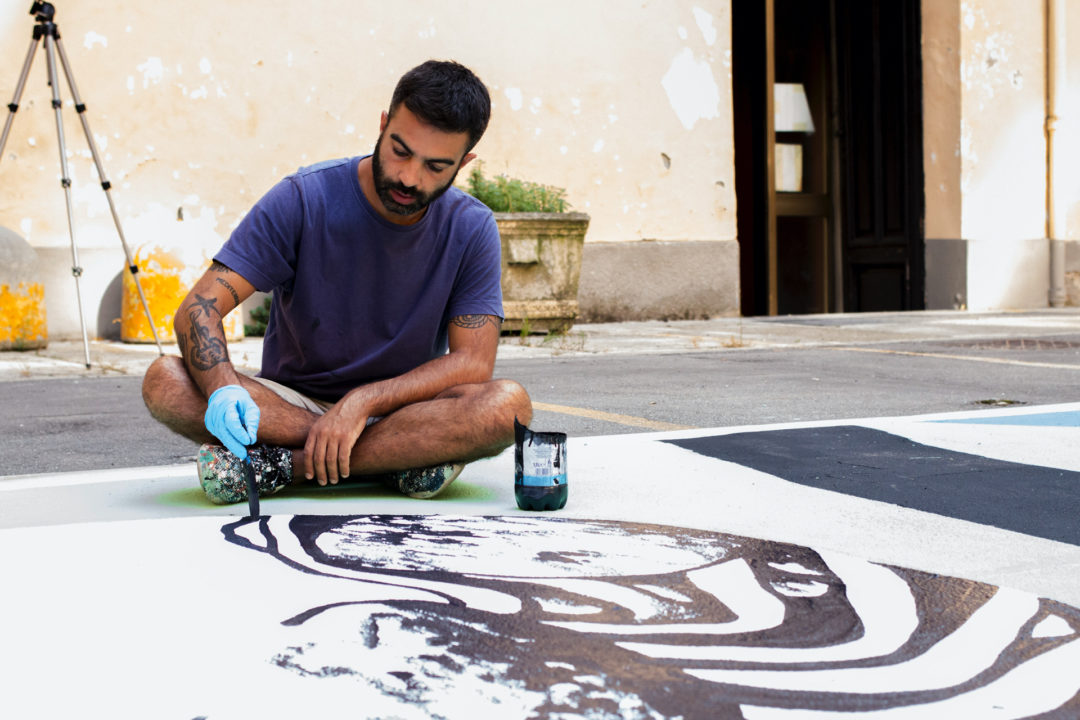 Just one leaf and the creativity of the artist Lito Leaf comes to life and creates something extraordinary simply from nothing.

I make positive use of my concentration despite a deficit problem (ADHD), I try to commit only to my work and clipping.

There is no right or wrong way to make art. Anyone can create anything they want using any shape, medium, material, or canvas they want.
From divers diving into the abysses meeting sharks to a rhinoceros brushing its calf’s teeth to superheroes, Japanese artist Lito Leaf sculpts the most fun and unusual scenarios on its leaves.

The artist uses a very precise cutout technique, a closer examination of each piece reveals surprising details that create dreamlike and unusual narratives.

From a simple and common leaf comes out something wonderful, here is one below our selection of his most beautiful works. 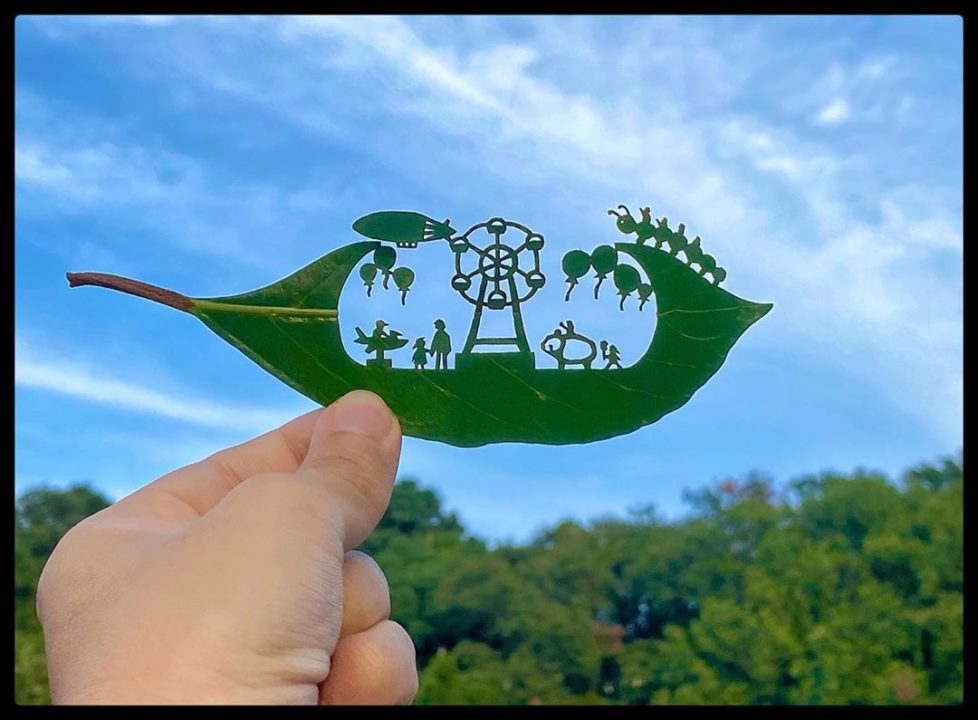 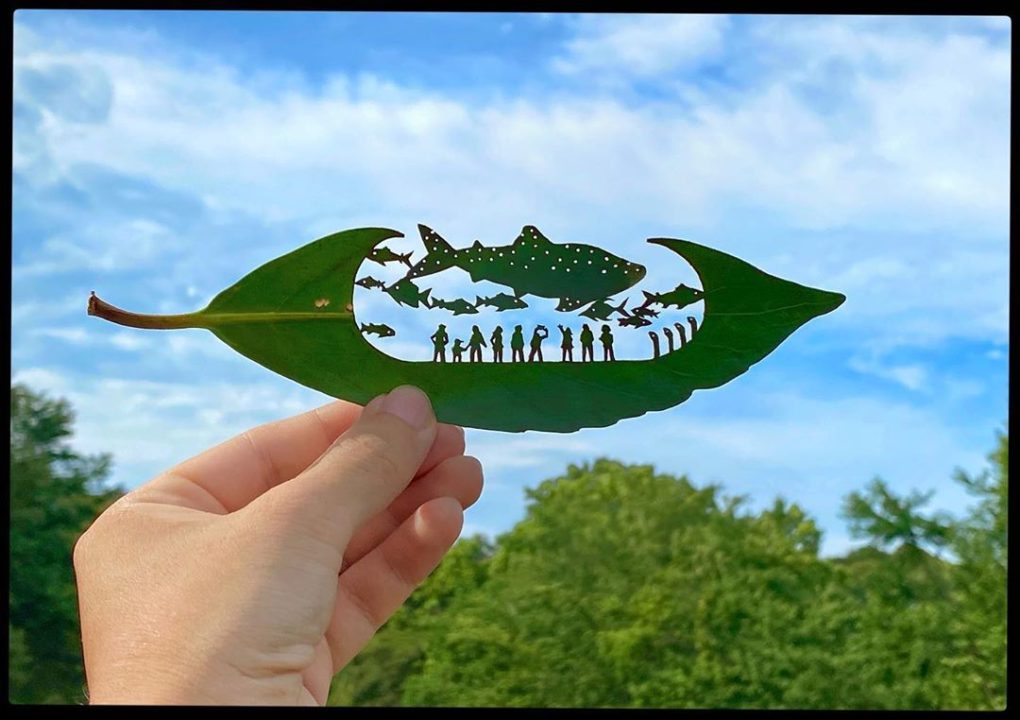 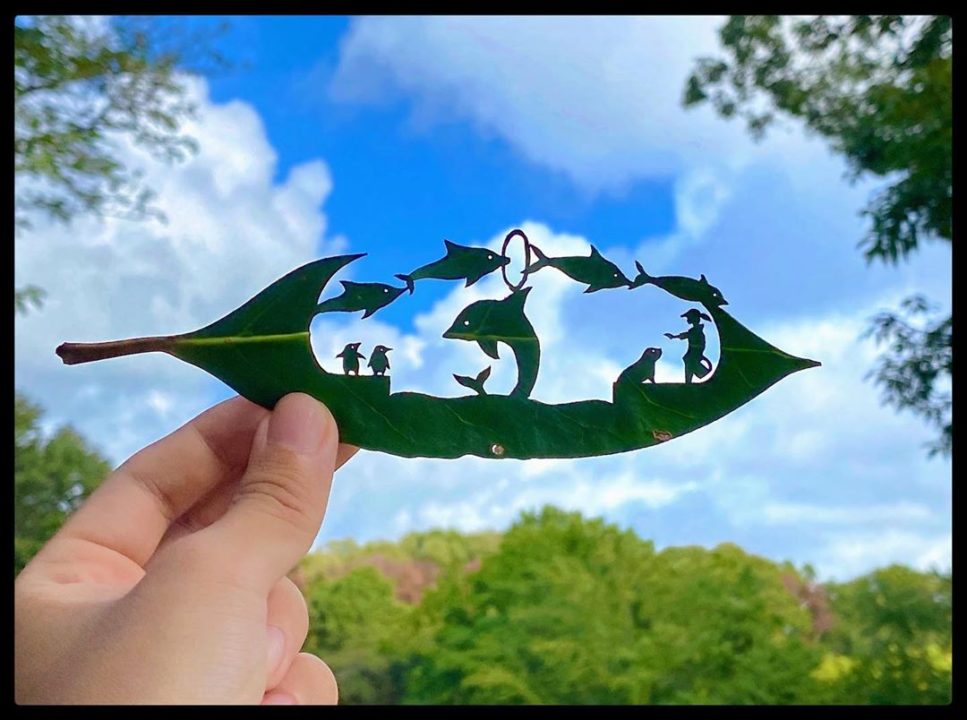 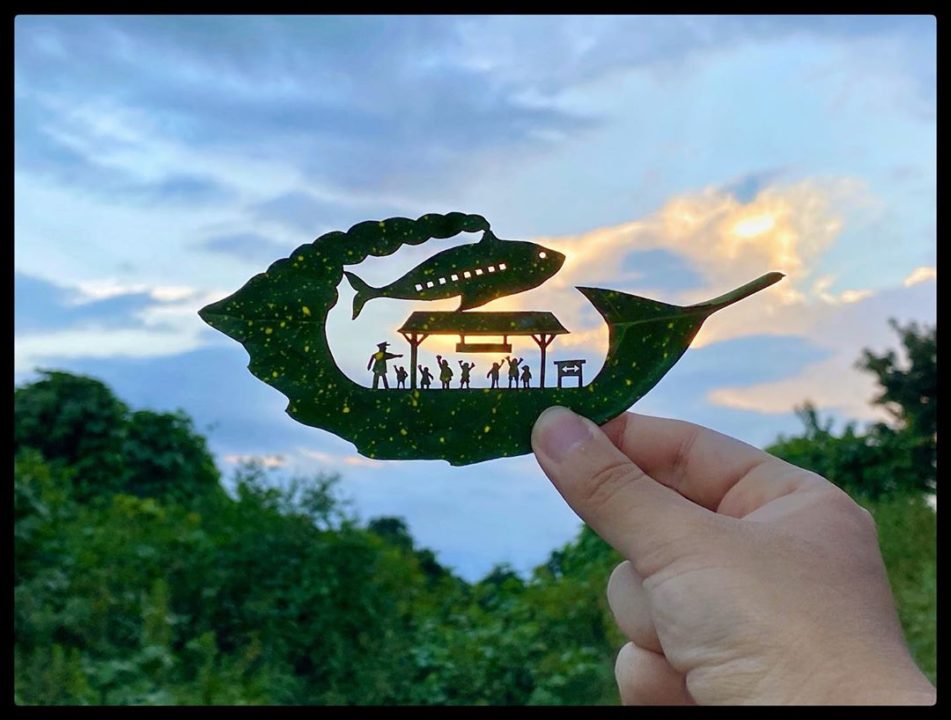 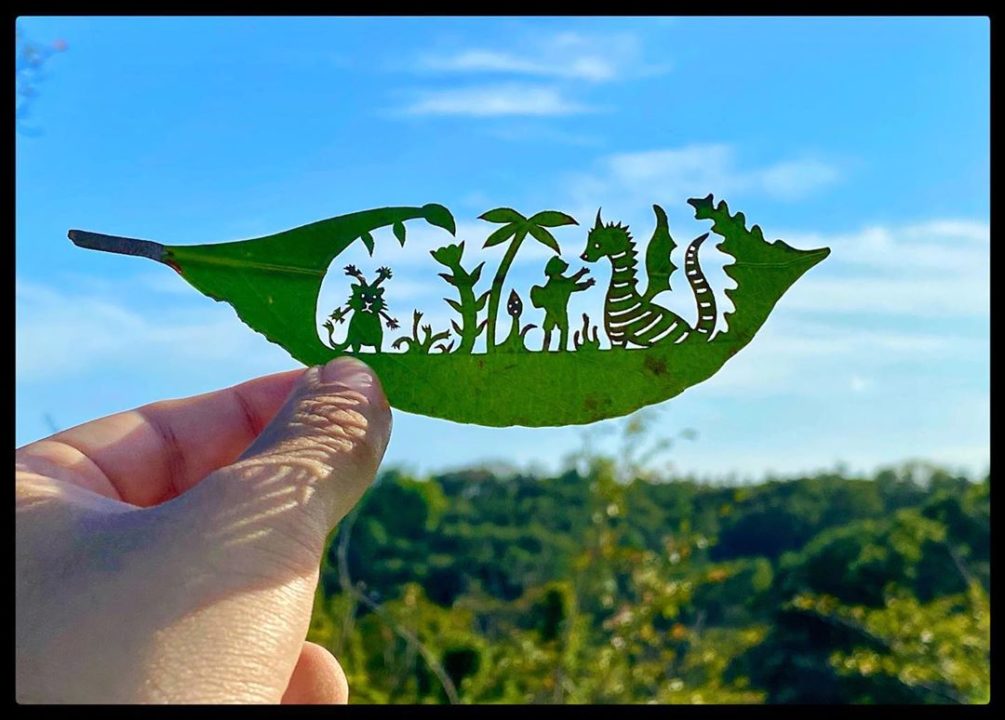 Lito Leaf, from a leaf to a work of art