The fifth edition of AppARTEngo Festival, a public art event in Stigliano, in the province of Matera, has just finished.
During these three months, the festival hosted contemporary and international artists. The initiatives curated by artistic director Alessandro Suzzi didn’t play a passive and self-celebratory role, rather a synergy was created with the artists and the territory that has hosted AppARTEngo Festival since 2017. 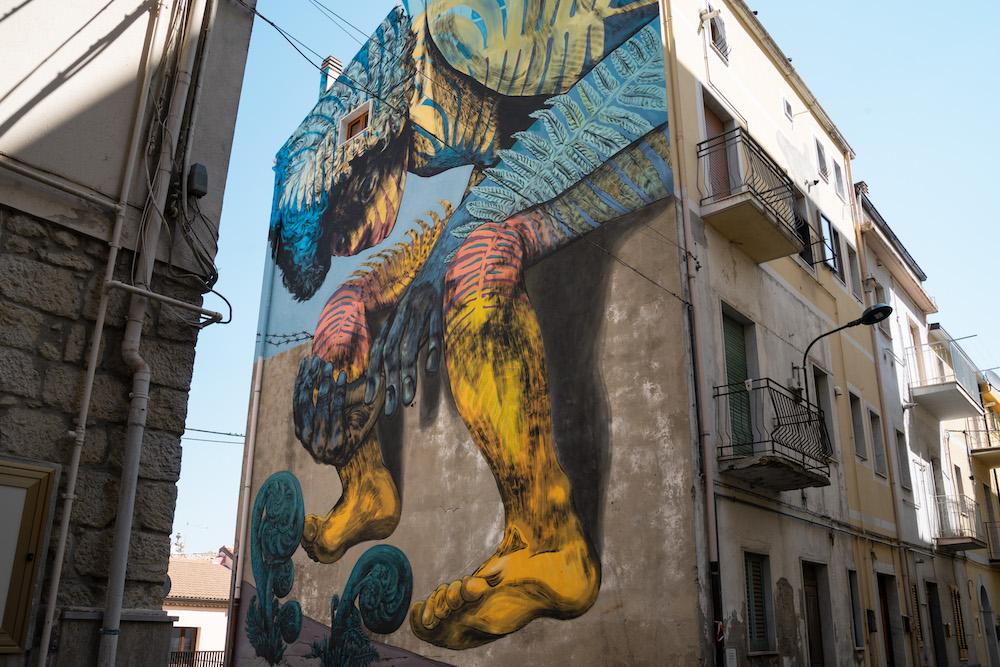 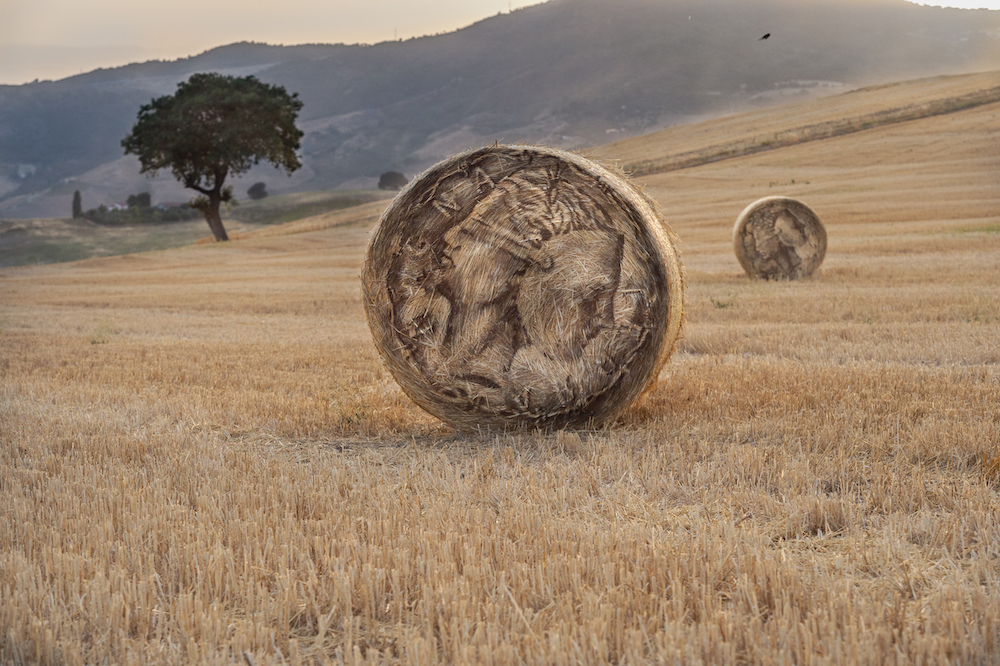 “With feet here, with the head in the world” this is the claim of the festival, and a look at the world means a look at a shared future. For this reason, the branches of the 2021 festival outside Stigliano (in the municipalities of Gorgoglione, Rotondella, Montalbano Jonico and Sicignano degli Alburni) are a preview of the 2022 edition.
The goal is in fact to create a traveling exhibition of public art projects, involving small communities and villages in Italy.
Given the success of the 2021 edition, the call to participate in the new Appartengo R-Evolution will start already on October 14, 2021, when the selection of only one municipality per region will begin. The goal remains to protect small communities from depopulation by engaging artists who intimately and physically connect to sincere and generous territories.

Visit the AppARTEngo festival website to discover all the works made in the 2021 edition. 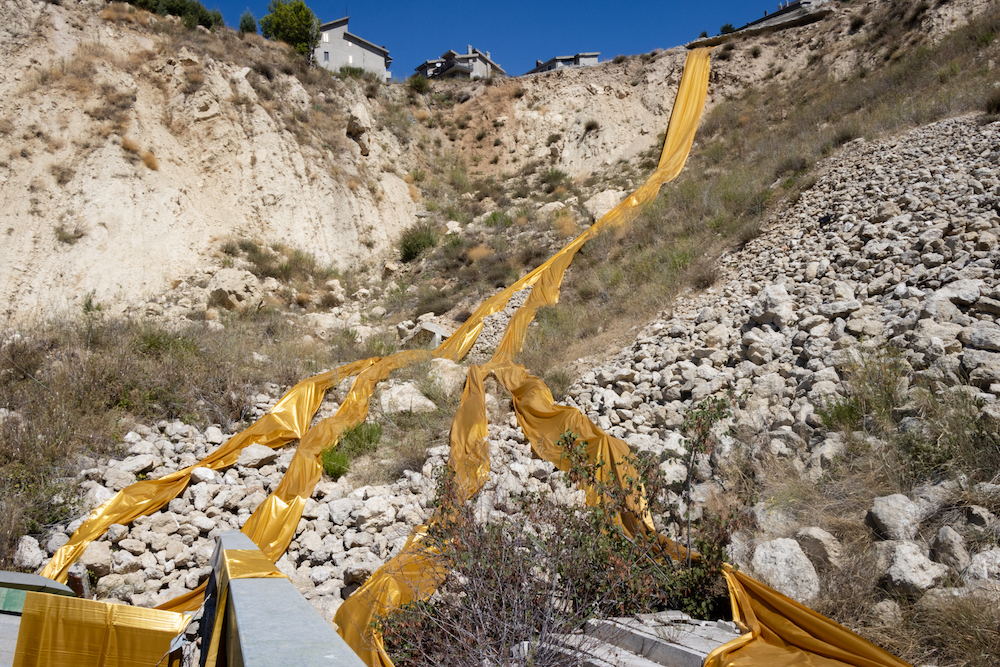 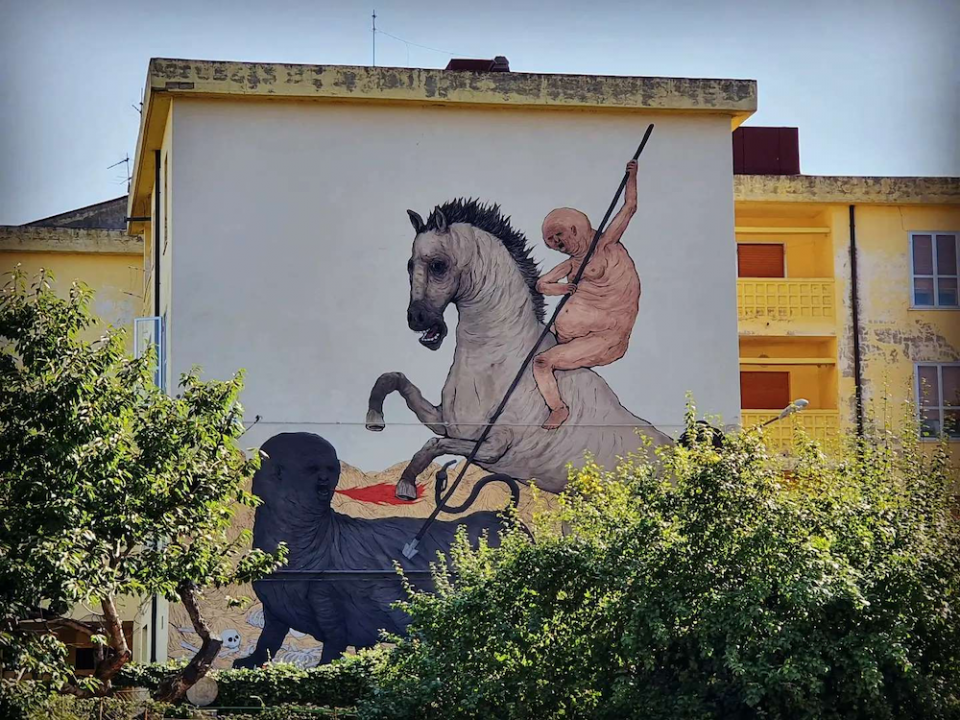 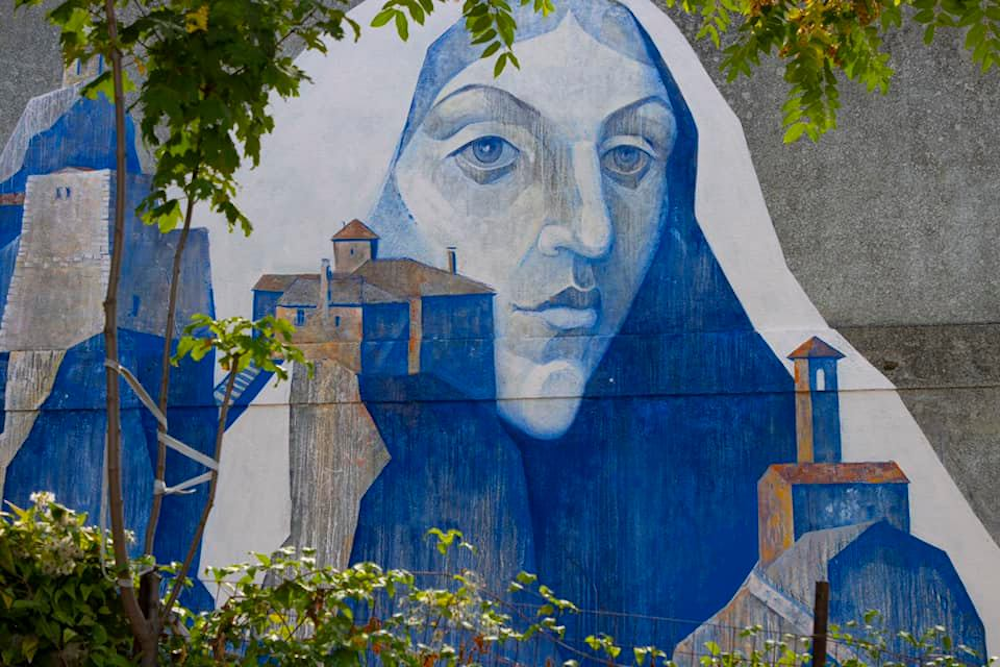 Every artist, consciously or unconsciously, would like their work to be recognizable without the need for a signature or an accompanying tag. To be able to reach this level, or this goal, one must have a clear and winning idea. This is what John Blond, visual artist and designer from Catania known for his patterns called “Noodles”, had.

John Blond began making graffiti at the age of twelve, using spray cans sold by his mother’s tobacco shop. With the years he has developed these patterns formed by black and bold lines on monochrome backgrounds with bright and vivid tones.

They are simple patterns, with a strong visual identity, easily recognizable, but above all that adapt to different surfaces and media. Precisely for this reason, we can find his “Noodles” declined in interior and exterior mural, in canvases, as a decorative motif for bottles, vases, teapots, fabrics and much more. Some of his products are part of the line “Noodles by John Blond” for sale on his website.

In addition to developing his personal projects, he currently works as a designer for the design and web development studio The Wave and also co-founded the independent magazine about street art and street culture Graffgo Magazine. Next weekend, Saturday, October 16, Graffgo will officially present to the public the new issue entitled “A new chapter of our life” with a live meeting hosted inside the streetwear shop in Catania, via Mariosangiorgi 59.

“Noodles”, the pattern by John Blond

We live in a time that does not believe in forever, we grow up changing phones, cars, cities. We are used to temporary contracts and relationships in a sort of culture of abandonment, yet everything we leave behind remains. It’s a lesson we are learning at our own expense, artists like Nazareno Biondo try to make it tangible.

His projects start from the symbols of the disposable philosophy, an unlit cigarette, bottle caps and packaging that we can find on the sidewalk of any urban area. In his workshop the waste of a hurried society becomes eternal artworks. Like the sculptures of the ancients, the chosen subjects become timeless testimonies of a contemporary thought and life. Represented with a critical hyperrealism, packages of cigarette papers, condoms and tin cans are ennobled and impose themselves to the viewer in all their ironic majesty.

We deal with them every day but it is as if we were seeing these objects for the first time, every minute detail emerges from the blocks of Carrara Marble that the artist reuses: “Nothing in my work, as in the world we live in, should be wasted”. Looking at them we feel a strange closeness and connection, it happens to us too to feel used for specific purposes, only to be abandoned for no reason. Nazareno Biondo’s works go down to a deeper level: the waste of everyday life becomes a metaphor for a collective feeling. It is a decisive stance against the custom of mass culture, a silent protest and full of meaning.

Belin, Slim Safont, Jorit, Helen Bur, 3ttman, Marta Lapeña, Elisa Capdevila, Lidia Cao, Tony Gallo, Attorrep, Mr. Blob, Stereal, Psiko, Nico Skolp, Carlitops and Kraser, they are the authors of the new works that in recent weeks have been made in different neighborhoods and areas of Taranto.
These national and international artists have responded to the call of T.R.U.St., the project that, now in its second edition, this year has given 16 new works of urban art not only to the city, but to the entire community.

Through the new walls, the neighborhoods of Salinella, Tramontone, Paolo VI, the Via Ancona and Isola Madre underpasses and the city center have taken on new life, transforming the streets into an open-air museum.

From today, thanks to T.R.U.St., Taranto not only has to offer a mural tour enviable by any other city, but has officially become the European capital of street-art.

To take care of the artistic direction of the entire project Giacomo Marinaro of the Rublanum collective, a reference figure in this field, having already organized the traveling exhibition Gulìa Urbana that this summer brought street art in several villages in Calabria.

Discover below all the works of the second edition of T.R.U.St.

16 new mural for Taranto thanks to T.R.U.St.

When we are in front of an unconventional work, we often think of a world out of the box, where the artist creates outside of any scheme. Ironically, in the creative universe it often happens that the most lateral ideas come instead from limitations. This is demonstrated by the artistic career of Phil Hansen that, even before starting out, suffered a setback due to a tremor in his hands that prevented him from making steady strokes. The pointillist technique becomes increasingly tiring and a vicious circle leads the young Phil to aggravate the situation and abandon his dream for years.

“Embrace the shake”, changes with these words the life of the artist who stops looking beyond to start seeing through his abilities. A new season of research begins, without impositions, the hand is left free on the sheet and the resulting expressiveness becomes more intimate and original. The pointillist technique becomes pure fragmentation of the image, a larger scale and materials circumvent the tremor and Phil Hansen develops what today is his style: a 360 creative approach.

The whole body is used in the works, the feet on the canvas replace the brush and Bruce Lee is portrayed with karate strokes. Freeing art from any compulsory support, the works become surprising, like the 3D structures where a blowtorch reveals the subject, or the paintings that the artist draws on his chest. Experimentation and emotionality are the key words of a work that goes beyond the concept of artist, involving the public in the work, and then, beyond art itself as in the project Good bye Art. For a year the artist commits to think, create and destroy 23 works to achieve pure expressive freedom. “While destroying each project I learned to let go of the results, the failures, the imperfections”, with this approach Phil Hansen employs temporary materials such as frozen wine, hamburgers, chalk, matches and candles to burn, to produce art that finds in its limited existence its reason for being.
es, such as the thrilling portrait of Edgar Allan Poe are followed by devoted fans proving that “we must have limitations in order to overcome them”. This is the new philosophy of the creative who sees art as an ongoing process, unencumbered by expectations and results.

Phil Hansen and art as a process