In 1997 Nike launched one of the most innovative, futuristic, disorienting, polarizing, divisive and successful silhouettes in the brand’s history, the Nike Air Foamposite.

The reception of that basketball shoe so different from anything seen up to that moment divided public opinion into two camps: on the one hand, there were those who branded it as a failed experiment, both from the point of view of design and from a structural point of view, even claiming that Nike was throwing away all the work done with the Air Jordan line; on the other, there were those who fell in love at first sight, seeing a decisive step in the future.
Doubts, however, were dispelled almost immediately.
Right from the first tests in the field, it was clear that the shoe of the future was not just an aesthetic quirk but translated into an incredible comfort and thanks to the heat developed during the activity inside the shoe, the Posite upper molded around the foot, this peculiarity made the Nike Air Foamposite one of the best performing basketball sneakers ever made.

“What if you literally just dipped your foot in this liquid bath of material and it just sucked around your foot? What if you could play basketball with the resulting structure?””
Eric Avar

It began as an experimental project by Nike’s Advanced Product Engineering team led by Eric Avar and current Director of Footwear Innovation Exploration, Jeff Johnson, and soon turned into the Beaverton-based company’s most expensive silhouette ever: the mold used to create the shoe alone cost Nike a whopping $750,000. “Basically, it was a kind of coating of material into which we poured polyurethane. That way we defined shape and structure. The middle part of the mold defined the shape of the shoe, while the side moldings defined the outside details; then, we pressed all the parts together”, Avar stated.

The difficulty of Avar and his team was to find a contractor able to provide the synthetic material for the seamless structure of the shoe, the answer came from the Daewoo car company that contributed in a decisive way to the production of the Foamposite. According to Avar, the process of creating the 1997 model took about three or four years and was completed not without negative criticism as we said at the beginning.

Originally intended to be worn by the second-highest scoring fiddle in basketball history, Chicago Bulls star Scottie Pippen, who however refused once he saw them, it was another NBA player who chose to wear them, Anfernee ‘Penny’ Hardaway.
Avar called the then-guard of the Orlando Magic to discuss his new signature shoes after designing the Air Penny two years earlier, and they met, “We were finishing up and Penny looks at me and says, ‘what’s that in your bag?’ I almost hesitated to pull the shoes out of the bag but I did and he grabbed them and goes ‘what is this?’ I said it was a concept we were working on. He stopped me right then and there and said ‘This is it. I want this to be my next shoe'”.

Penny Hardaway in fact was the first NBA player to wear them on the court but the real debut of the Nike Air Foamposite on a parquet was thanks to Mike Bibby, at the time playground of the University of Arizona, the famous Arizona Wildcats, who wore the shoes during an NCAA game on March 23th, 1997.

Hardaway wore them in the second part of the 96/97 season but, given the regulations based on the coloring of the shoe – which had to be always in color with the colors of the franchise – the NBA felt that too much blue did not match the colors of the Orlando Magic so it seems that the same Penny Hardaway colored in black with a marker pen the grooves of the upper, creating the famous colorway “Sharpie”. 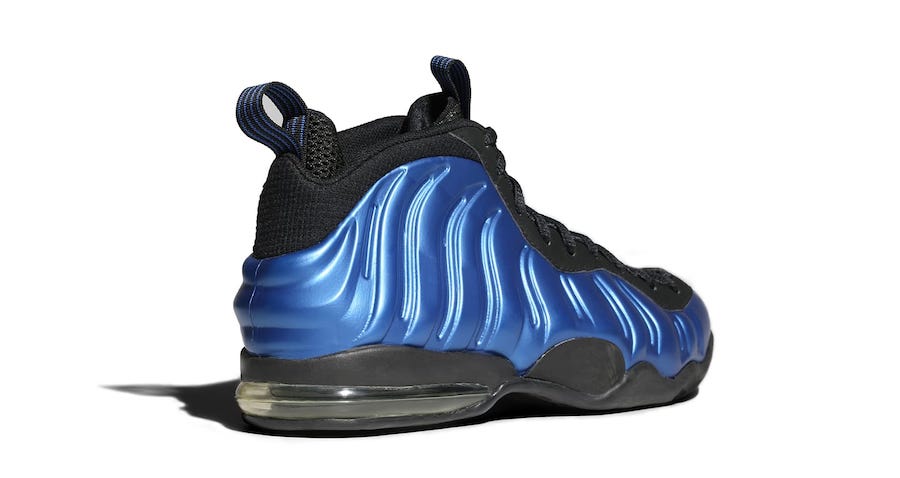 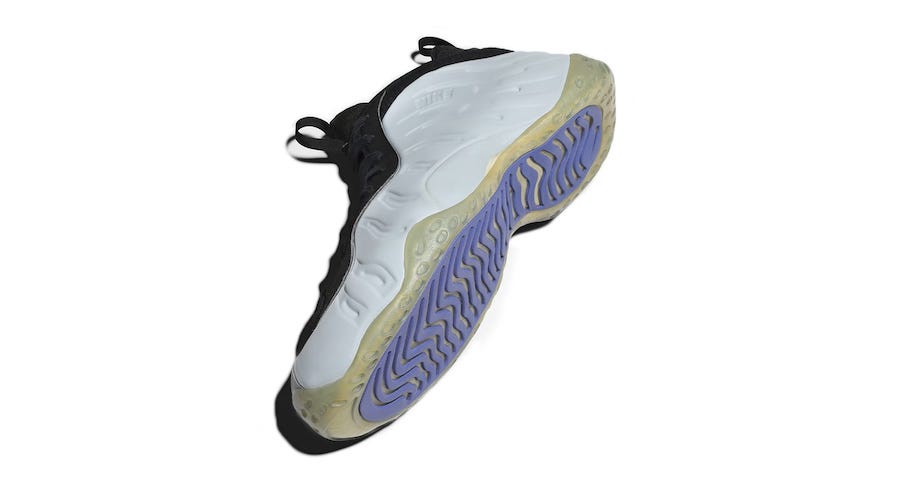 In these almost 24 years the technology that characterized the Foamposite has been used for many other models still present in the Nike Basketball catalog and many were the colorways made, making the leap off the parquet and becoming a cult model for every sneakerhead on the face of the earth.

With its hefty price tag and oh-so-divisive futuristic aesthetic, the Nike Air Foamposite has become one of Nike’s most sought-after silhouettes and cultural landmark, as underscored by its 2014 collaboration with Supreme and the impending comeback of one of the iconic models in Nike’s entire history.

Gian Paolo Barbieri is one of the giants of fashion on film, a member of a group of photographers who have been able to depict the world of models, fashion shows and product by going beyond any superficial narrative.
An exhibition by the great master of photography Gian Paolo Barbieri opens in Milan today, Nov. 29, and at the 29 ARTS IN PROGRESS gallery at 13 Via San Vittore, Milan, he will present a series of never-before-seen, full-color works.

The title of the exhibition is ‘Gian Paolo Barbieri: Unconventional,‘ and it is indeed unconventional how the artist has approached photography and fashion, reworked based on the many experiences and celebrities with whom he has woven relationships and direct contacts.
In the shots of Barbieri, known mainly for his black and white production, provocation and history chase each other, taking up poses from art history, citations to design and architecture, a symbolism that is connoted by an ultra-personal and authentic vision. The new elegance and eroticism that Barbieri has been able to represent in his career can be seen at the 29 ARTS IN PROGRESS gallery, in an exhibition that comes a few days after the cinema release of “L’uomo e la bellezza,” the first docufilm on Gian Paolo Barbieri and already awarded at the Biografilm Festival 2022 in Bologna.

What happens to society if suddenly the status quo changes? Swedish director Ruben Östlund‘s answer is called Triangle of Sadness.

Triangle of Sadness was presented during the 75th Cannes Film Festival, where it was awarded the Palme d’Or for best film. Since then its success has crossed all borders. From Sweden to France, from France to the world, abetted by a trailer that in just a few seconds already manages to capture the viewer’s attention and catapult them into this critique of modern society watered by champagne and vomit.

Carl and Yaya are two models who decide to take a luxury cruise. During the vacation they get to know the other passengers, without ever really relating to them, until at one point the ship sinks and the survivors find themselves on a deserted island. It is at this point that a role reversal begins, and those who were previously at the top of the social pyramid now find themselves having to work for the only people who really know how they can survive in that circumstance. Some will be able to forget the luxury and adapt to the new status quo, others less so, but the more days go by the more the transformation from human to beast takes place.

Ruben Östlund, however, decides not to take sides and leaves it up to the viewer to decide whether this process of decivilization will be finished or whether there is still hope in human consciousness.

In sharp contrast to the brutality and cynicism of the plot we find a clean and elegant aesthetic, also the child of the work of Fredrik Wenzel, a Swedish cinematographer who also collaborated with Luca Guadagnino on the miniseries We Are Who We Are. Thus, the more critical the situation becomes the more beautiful the image becomes, mesmerizing the viewer.

One piece of advice, however, I will leave you with: watching Triangle of Sadness after dinner may not be the best idea.

Triangle of Sadness in 10 frames

“The Beauty of Imperfection”-the shots of Alina Gross

Don’t Worry Darling is one of those cases where one watches the film more out of curiosity than healthy interest. The film, which arrived in theaters last Sept. 22 and was presented at the Venice Film Festival last Sept. 5, began to be talked about long before the trailer, teaser and first photos from the set.

In fact, the controversies began right at the beginning of filming, when Olivia Wilde, who signs off as director, fired Shia LaBeouf, justifying this decision to the actor’s method of working, which according to Wilde did not fit her modus operandi.
Olivia Wilde’s problems also continued with the leading lady, Florence Pugh, with whom she seems to have had several tensions (never publicly confirmed).
Rounding out this complicated production phase came the director’s choice to replace LaBeouf with then-partner Harry Styles.

Inevitably, all these events also took their toll on the promotion phase, which, however, shifted the focus from the actual film to pure gossip.

A shame? Perhaps not.

Alice and Jack Chambers are a happily married couple living in Victory, an experimental 1950s community where the men spend all day at work, while the women take care of the house, and then spend their free time with their neighbors. Something suddenly changes, however, and Alice begins to feel constrained in that life, with an increasing desire to discover what lies beyond the city limits. This is the plot, which in itself also hides something potentially interesting, unfortunately it is the development that is lacking. It’s like when teachers in school used to say “he has potential but he doesn’t apply himself.”

Of all that Don’t Worry Darling puts on the table-which seems more like a need for redemption on Wilde’s part-something is saved and it is the reason why the film lets you watch it to the end: the aesthetics.

In fact, the director used the work of Matthew Libatique, an American cinematographer and regular collaborator of Darren Aronofsky, to take care of the photography. In nearly three decades of work, Libatique has handled the cinematography for such films as Requiem for a Dream and The Black Swan, experience that led him to be prepared for the eerie reality brought to the big screen in Don’t Worry Darling. It is immediately noticeable how the warm light that illuminates the entire town becomes cold and gloomy when Alice is alone with herself, and becomes colder and colder as time passes. The use of light, then, goes hand in hand with the colors of the places: for example, the bathroom tiles are green, reminiscent of hospital uniforms.

For this reason, it was particularly difficult to select only 10 frames from the film, which perhaps focused heavily on aesthetics and too little on content.