This year, on the occasion of the International Migrants Day – which has been celebrated on December 18, 2000 – the Refugee Council, in collaboration with the association Famiglie Insieme, has made Young and Alone: Without My Mum, a stop-motion short film about the horrors of war, and the daily conflicts in which children are removed from their families and left with no choice but to flee alone for their safety.

Without My Mum was created by Catherine Prowse – a London-based stop-motion animation director, set designer and model maker – and tells the story of a mother and her young son, whose family relationship changes instantly when the violent situation forces the mother to make a devastating decision: stay at home and in her country while it quickly turns into a conflict zone, or protect her son and bring him to safety – in any way possible. In total desperation she chooses the latter option and, even if her son finds security in Britain and support from an adoptive family, there is no happy ending as the teenager is traumatised by the separation from his mother, which breaks the prospect of a future with her.

This short film is part of the Families Together campaign – from which it has been funded – to raise public awareness of the plight of refugee children who cannot be reunited with any of their families in Britain because of the unfair and very restrictive rules that apply in the country.

This is because unlike most other European countries, which actively support the family reunification of refugee children, UK immigration rules deny them the right to reunite with any family member who is still overseas. The aim is to convey to viewers that having to flee home for these kinds of reasons is something that could potentially happen to anyone, including them.

Without My Mum, migrants’ heartbreaking story

To become one of the best NBA players in history requires sacrifice, dedication, and perseverance, but to become a symbol, the idol of millions of people needs much more. That’s why LeBron James did it because he won both on and off the field and Nike couldn’t help but tell his story in one of his winning commercials.

Beginnings is the title of the video that in little more than a minute not only retraces the stages of the NBA champion’s career but also retraces his life, starting from his humble origins to which he owes his nickname “a kid from Akron” arriving at the opening of “I Promise School”, a school that James himself financed.

As the images scroll across the screen and the notes of Bon Iver’s “Naeem” resonate in the background, the words of Los Angeles Laker number 23 are lapidary.

LeBron James in the latest and exciting Nike commercial

Carlos Jiménez Varela, an award-winning creative director and designer from Costa Rica and specialized in photocomposition and photo retouching, has created the Air Jordan Project, a project where he portrays the sneaker models of the Air Jordan brand line in a surreal way. The work consists in enlarging in scale each shoe produced by Nike and, subsequently, positioning it in different places, in a methodical way so that the sneaker can blend with the surrounding environment. To achieve an optimal result, the artist used Photoshop for image processing and post-production. The way it was used, the color, in fact, is not necessarily the one in which each model was released, but the one that best suits the composite from an artistic point of view.

Then Carlos Jimenez Varela, for the realization of Air Jordan Project, personally took the photos of the environments or found them on royalty-free websites such as Unsplash, Pixabay or Pexels and, again using Photoshop, the artist made some changes to better insert the shoe into the context. The photo of the sneaker itself comes from Amazon or other online retailers.
The environments in which the shoes are inserted are multiple, from city streets, airports, beaches, seabed, etc. etc.. 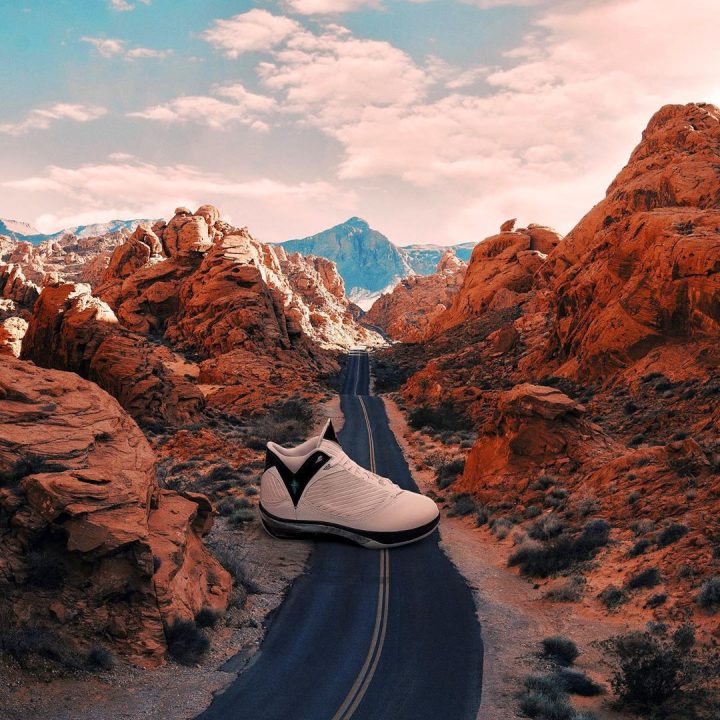 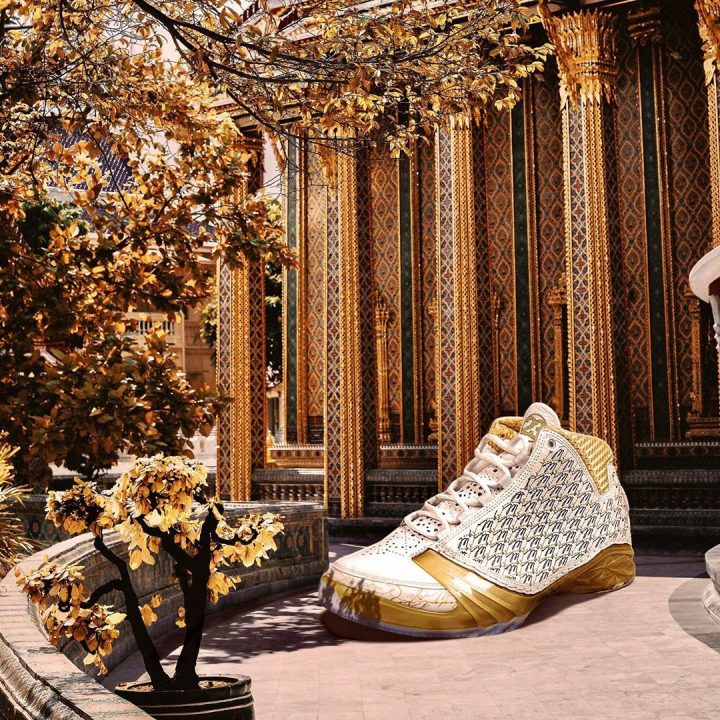 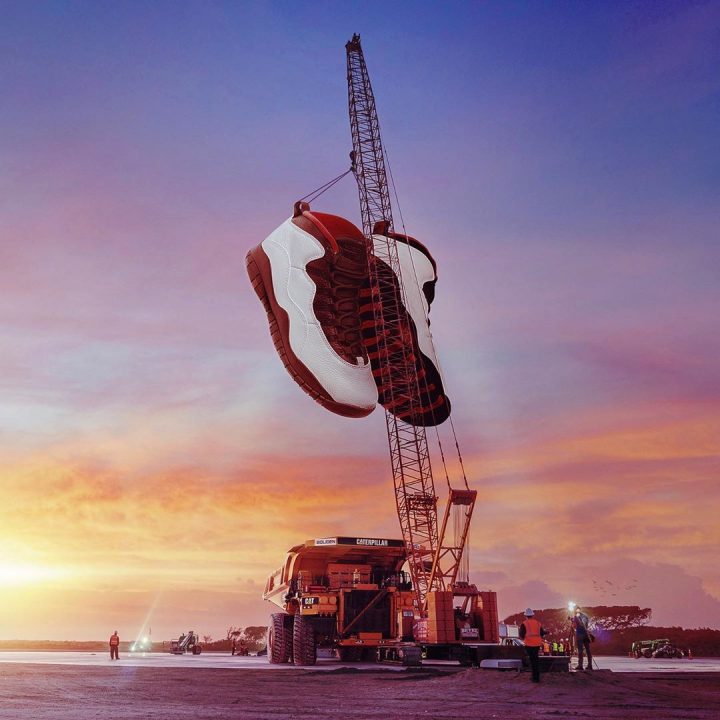 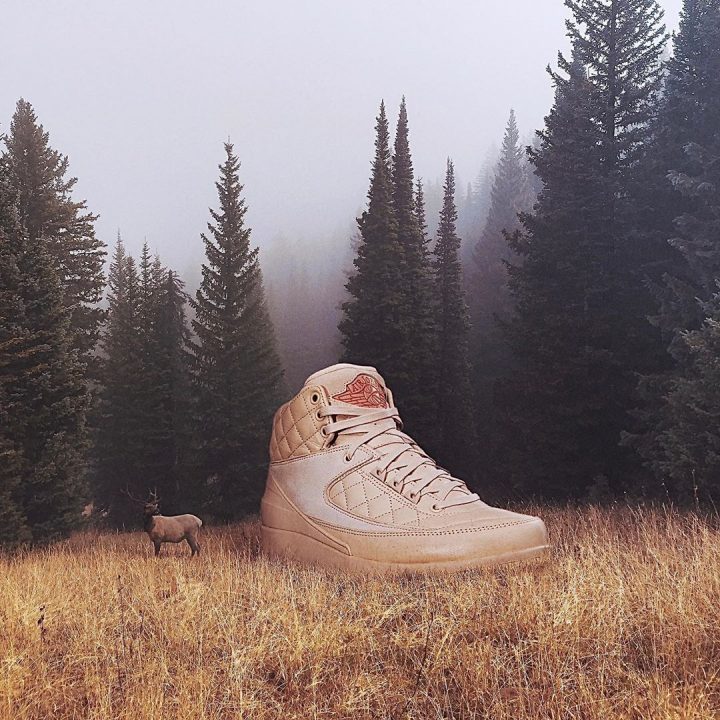 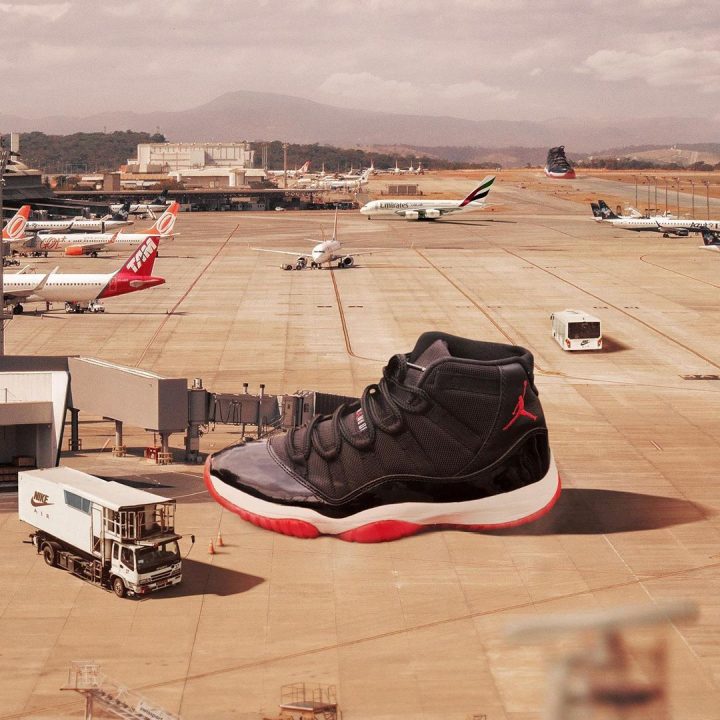 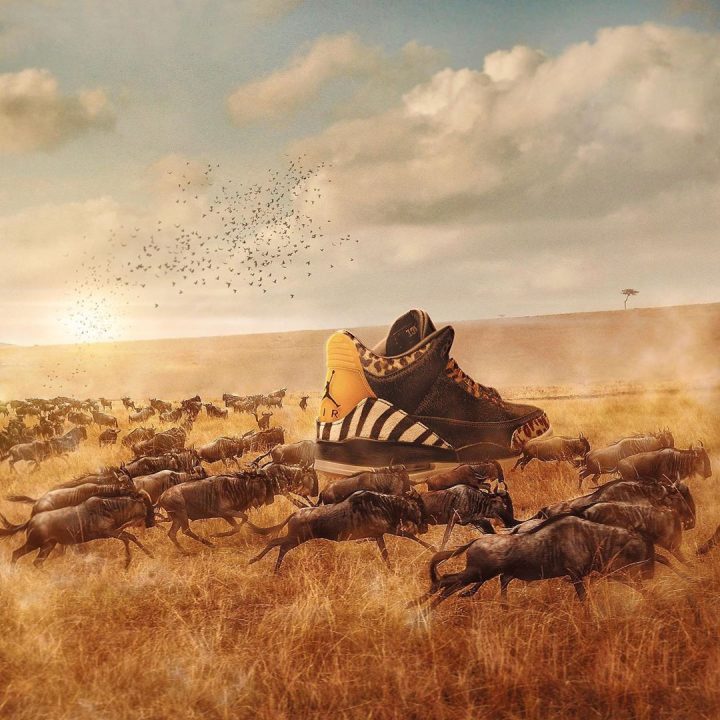 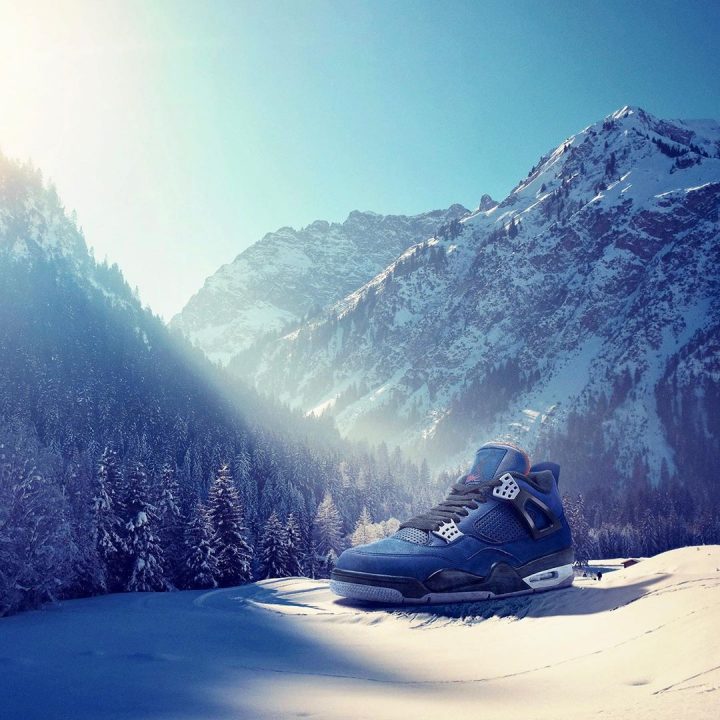 The project follows a chronological order and the shoes are placed according to the period in which they were released. Air Jordan Project and the other works are on the official website of the artist and on his Instagram profile!

From Nike’s tearjerkers to those signed by great professionals such as Ridley Scott. This year brands and organizations have challenged each other with commercials and advertising campaigns. Let’s find out together what drove us crazy.

We can’t draw up the ranking of the best commercials of 2019 without including one from Nike – spoiler: it won’t be the only one. At the top of our list then there is Dream Crazier, the commercial, narrated by Serena Williams, which enhances the women of the sport and shows their tenacity, determination, and aggressiveness: these athletes have broken the barriers and exceeded their limits.

Released on May 17th, on the occasion of the International Day Against Homophobia, the IKEA #Fateloacasavostra campaign was accompanied by a touching commercial in which Michela and Alessandra, William and Micheal, Marco and Marco, Silvia and Domiziana, alone Josephine appear. 9 faces in which is enclosed the story of infinite others, of all those who “have been asked” to show their love within four walls, where no one could see or hear them.

MENstruation, the Thinx commercial in which men also get their periods

If we all had our period, maybe we’d all be more comfortable. That’s the thought behind MENstruation, Thinx’s first national campaign. In the commercial we see men in situations that are considered normal for every woman and girl: staining the bed at night, dropping Tampax from the bag or lending themselves a tampon.
It’s a campaign that makes you think and reflect and perhaps, for the first time, the advertising of a product for menstruation is aimed at men and not women.

Gillette supports the Me Too movement with the spot We Believe: The Best Men Can Be

In the #MeToo Era, Gillette’s famous slogan “The Best A Men Can Get” cannot remain unchanged. This year, the well-known shaving products company decided to propose “We Believe: The Best Man Can Be”, which is against all those sexist behaviors, openly taking sides against all kinds of violence.

The one signed Burger King is just one of many commercials released during the night of the Super Bowl. The famous fast-food chain wanted to show how certain things never go out of fashion, and what better way than for Andy Warhol to enjoy his sandwich in peace?!

We anticipated that Nike would have more than one position in our personal shortlist. Here we are, then, with the second spot of the American giant that this time sees as protagonist Tiger Woods who at 43 years old has the same dream as ever, that of beating Jack Nicklaus’ eighteen majors.

Behind The Music, the latest Apple commercial that pays tribute to British music

This year Apple has updated its “Behind The Mac” advertising campaign, with a new nostalgic spot called “Behind The Music“.
Apparently, if behind every great man there is a great woman, behind a great musical success there is a Mac. In the one-minute spot, we see our English musical idols in the production or recording stages that always work behind an Apple screen.

For the campaign The Seven Worlds by Cognac Hennessy was named none other than the famous and award-winning director Ridley Scott. The video, just over 4 minutes long, is a journey to discover what is hidden in every single drop of one of the world’s most prized cognacs. The Seven Worlds is proof that sometimes great cinema and advertising are not only close worlds but when they are united by a great professional the result is sensational.

There are things that only a glance can tell you. For this reason, every year, on the second Thursday of October, World Sight Day is celebrated, and for the occasion, Salmoiraghi & Viganò has created a touching commercial that celebrates in all respects the sight and what is able to make us live.

It seems that Netflix really wants to start the new year with a bang, from epic and eagerly awaited returns to season finals that we wish they’d never come. Let’s find out what’s new and what dates to mark on the calendar together.

Anne with an E: the finale season: 2020 begins with a season finale, the series inspired by Lucy Maud Mongomery’s novel, in which the adventures of Anne of Green Gables are told.
The ten episodes of the third and final season, after having already been broadcast in America by the CBC, will arrive on Netflix on Friday, January 3.

Frankie & Grace, Season 6: Over the years it seems that Frankie and Grace, or rather Jane Fonda and Lily Tomlin, have made a breakthrough in the hearts of Netflix subscribers, so much so that Netflix renewed the series for a sixth and a seventh season even before the release of the fifth.
The 13 new episodes will be available from Wednesday, January 15 and who knows, maybe there will be weddings and new loves on the horizon.

A Fall from Grace: When gentle, law-abiding Grace confesses to killing her new husband, her skeptical young lawyer sets out to uncover the truth. So this is the official plot of the film by Tyler Perry, which at the moment does not have a trailer yet.
This crime/thriller will arrive on Netflix on Friday, January 17.

Sex Education, Season 2: One of the platform’s most successful series, with over 40 million viewers, the announcement of the second season of Sex Education came almost a year ago, with the reconfirmation of the entire cast.
The new eight episodes, in which we will find out how Otis and his friends will evolve, will be available from Friday, January 17.

Chilling Adventures of Sabrina, Part 3: In the new year, we’ll also return to Greendale, that we left just after Nick’s sacrifice. Saving him will probably be the mission in which we will see the young witch and her friends engaged in this third part. Ready for some thrills?
The eight episodes of the third part will be available from Friday, January 24th.

All the must-see January Netflix films and series